THE 4th ASIA PACIFIC MINISTERIAL CONFERENCE ON HOUSING AND URBAN DEVELOPMENT (APMCHUD), Youth and IT in Sustainable Urban Development 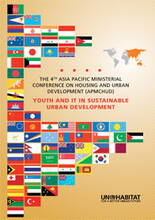 The Asia-Pacific region has more than half of its population composed of young people. The region is experiencing quite a number of positive developments but equally in the same measure registers quite a number of challenges amongst which are unemployment, poverty and increased population in slums. Recognizing this, the Asia Pacific Conference on Housing and Urban Development adopted the theme ‘Youth and IT in Sustainable Urban Development’.

Youth want recognition, meaningful employment and engagements in decision-making processes. It is becoming a very strong tool for connection, and the burning question is how ICT companies under the public-private partnerships can come up with modalities and take more social cooperate responsibilities in addressing short-comings. Youth should be seen as positive human power and not as a problem.