Turkana County, Kenya, 2016. Turkana people have been nomads for generations, walking their cattle long distances and often across borders seeking for better grassland. Once the benefits of being settled have become more attractive to Turkana people, there has been a shift from a pastoralist community to a settled society. However, this change has been challenged by different issues, from water provision, to shelter and self-sustainability. The land of Turkana is very difficult for settlers, from water and food scarcity, to disasters such as flood and erosion. But this has not stopped Turkana people from building their own settlements and cope with the challenges of being settled. Today, Turkana is a very well governed county, with high ambition to achieve urbanization, despite the rough climatic conditions. 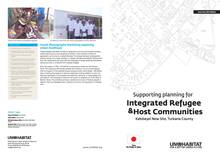