Streets as Public Spaces and Drivers of Urban Prosperity 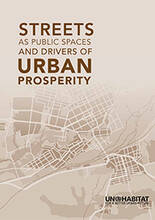 The Publication "Streets as Public Spaces and Drivers of Urban Prosperity" was launched by the UN-Habitat's Executive Director, Dr. Joan Clos, on 12 November 2013 at the UN-Habitat Headquarters, Nairobi.

A key finding of this report is "the expansion of cities has been accompanied by changes in land use, both in terms of form as well as structure. Streets, as public spaces, have lost their importance in terms of their share of land, as well as their prominent role in shaping the culture and history of cities."

Another key finding of this report is "prosperous cities are those that recognize the relevance of public spaces (with proper layouts) and those which have allocated sufficient land to street development, including sufficient crossings along an appropriate lengthy network. Those cities that have failed to integrate the multi-functionality of streets tend to have lesser infrastructure development, lower productivity and a poorer quality of life".