Featuring the role of cities in climate action at COP25 Week 2:

MADRID, 16 December 2019 - The second week of the COP25 featured the voices of local and city leaders, meant to continue to instill key messages on local actions.

Monday 9 December opened at the European Union Pavillion with key players of the Global Covenant of Mayors for Climate and Energy (GCoM), the largest platform of local governments committed to climate action. Together the 10,239 cities of the GCoM are meant to avoid more than 24 billion tons of CO2 by 2030, and more than 90 billion tons by 2050. That’s 13 times the current annual passenger road emissions of the US, China & India combined claimed the platform at opening panel which unveiled its new report Climate Emergency: Unlocking the Urban Opportunity Together.

The GCoM announced on 10 December the nomination of five frontrunner cities selected for their ambitious and potentially transformative urban climate projects to receive technical support for the European Investment Bank (EIB). Cotonou (Benin), Makindye (Uganda), Monastir (Tunisia), Jambi (Indonesia) and Recife (Brazil) will serve as role models for climate action in key sectors and cities in the Global South.

As the ground-breaking European Green Deal was announced Tuesday, it was an opportune moment for the GCoM to announce financial support to cities through the European Investment Bank. EIB President Werner Hoyer affirmed its support as stated: “getting city climate projects off the ground. We need to identify what is really needed locally to make projects bankable, improve the lives of local people, and tackle climate change”. Financing constitutes a major barrier to cities to implement climate action. “Beating climate change won't require a miracle. It will take leadership and common-sense action - like investing in clean energy to reduce emissions and create new jobs” said Michael R. Bloomberg, Global Covenant Co-Chair and Co-Founder. Ms. Maimunah Sharif, representing UN-Habitat as a key partner of the GCoM emphasized that, “Responding to the current climate emergency requires working at international, national, regional & local levels to form strong partnerships, dialogue & cooperation mechanisms to tackle the global challenges.” 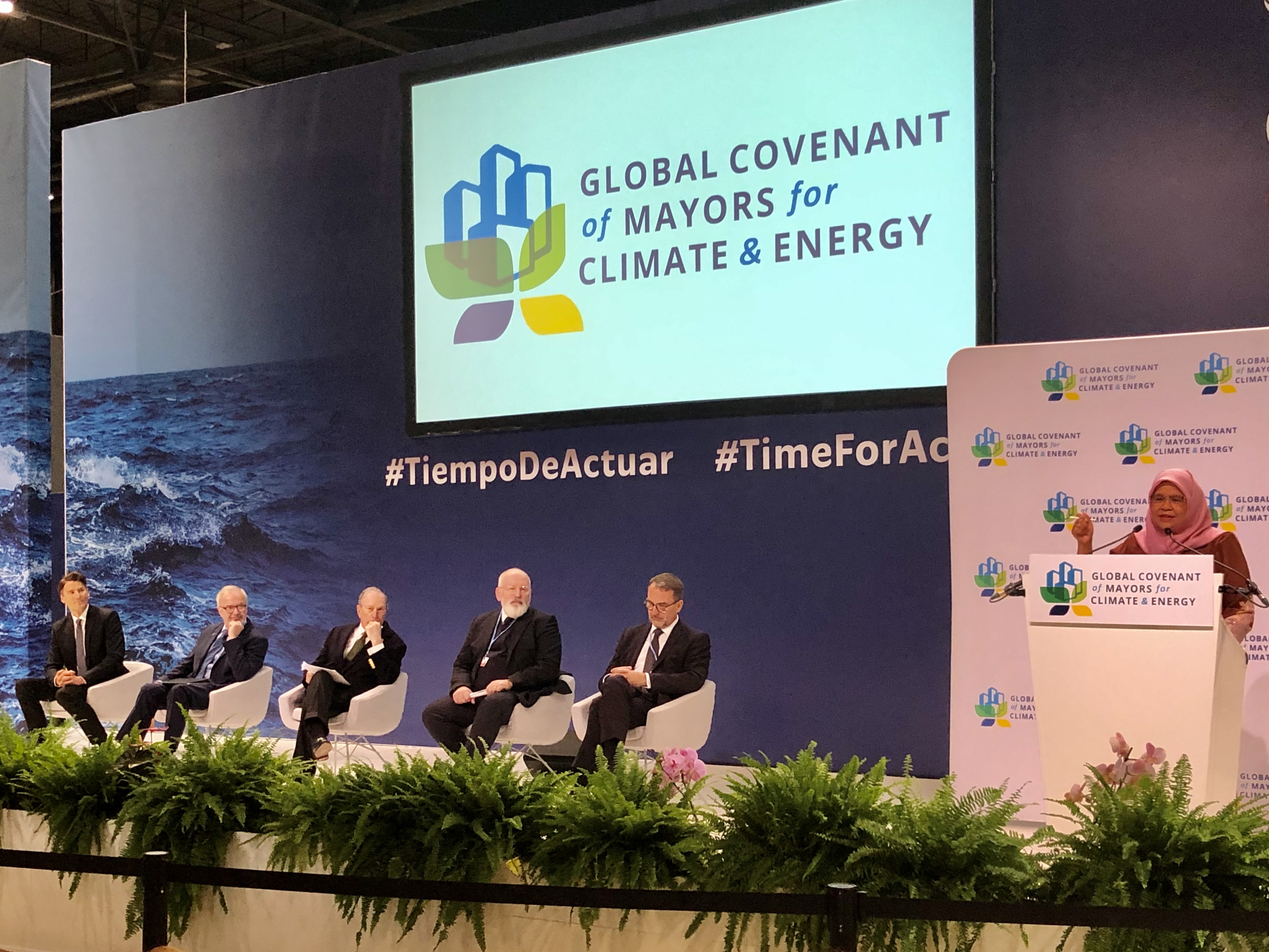 The role of cities in updating the Nationally Determined Contribution (NDCs) has also been a heated subject of the COP in the many ‘city’ event on Week 2.  During the GCoM event of Monday morning, UN-Habitat Executive Director emphasized the importance of moving from NDC to LDC, implying that NDC should include the commitments of cities given their tremendous impacts and add their ‘locally determined contributions’. In this climate emergency she said, NDCs have to align to regional and local plans and include urban content. We need vertical and horizontal integration of climate action, increasing collaborations to include the local level of action. Mayors Mohamed Sefiani of Chefchaouen (Morocco) Minna Arve of Turku (Finland), Xesco Gomar, Deputy President of Barcelona Province and Takeshi Shimotsuma, Director of Global environment and energy policy of the city of Kyoto, speaking at the event stressed the need to be accountable to our citizens and show concrete results through clean air and better transport. Climate action is about giving equal opportunities and engaging citizens in a joint battle at the city level that links to a global fight to ensure a future to our children.

UN agencies also gathered in a comprehensive One UN Cities event on Monday to exchange on climate compatible cities from their different perspectives. UN-Habitat ED reiterated the importance of implementing the “Sustainable Development Goal 11, the docking station for the other SDGs she said. Achieving SDG11 has direct positive impacts on achieving SDG13- Action on climate change and on many other goals”. Inger Andersen, UN-Environment Executive Director stressed the fundamental role of cities delivering solutions: “Cities are the beating heart of a nation. Cities have to be part of the solution. The way we manage our footprints in our urban settlements is critical to building a low-carbon, resilient and sustainable future for us all. The transition is about decarbonizing, decoupling and promoting the circular economy. We need to adopt nature-based solutions in cities”. UNESCO Director of Ecological and Earth Sciences Division Miguel Clüsener-Godt, reminded the key role of innovation towards resilient communities and ITU representative Maria Victoria Sukenik emphasized the role that smart cities will play in the transition.

In a high-level event From Chile to UK - the road to Glasgow, the role of city and sub-national contributions to raising NDC ambition and implementation was discussed with a larger gathering lead by President of COP25 Chile Minister of Environment Carolina Schmidt and Claire Perry O’Neil, COP26 President Designate from Glasgow. The event served as an opportunity for Ms. Maimunah Sharif to reiterate the support of UN-Habitat to strengthen the ‘urban’ content of NDCs meant to be updated in 2020. This will be a critical year in which cities have to make sure that their contribution is included in the NDCs and for Governments to systematically embed the role of cities at every level of their national commitments. This will require strong collaboration and cooperation. UN-Habitat will be a key player in that collective effort.

Urban mobility has also been a key area to discuss solutions in cities. In a side event on Smart urban transitions: innovative and efficient mobility solutions at the German Pavilion,

UN-Habitat ED assured participants of UN-Habitat’s commitment to low carbon mobility: We still have time to define the type of infrastructure that we need to achieve the transition. The smart transition to smart mobility needs collaboration of all, citizens, government, operators and we must ensure that no one is left behind. Public transport should be accessible, available and affordable. Sabine Drees, German association of cities said ‘public transport is fundamental to the energy transition. We need smart technology for the global south to move quickly to the transition through a multilevel approach.’ Mayor of Bonn Ashok-Alexander Sridharan also emphasized the importance of effective legal framework for the car companies and vehicles to reduce emissions of cars.

By 2050, it is expected that some 215 million urban poor will be exposed to extreme heat. An important session hosted by the Government of Turkey on Building the Climate Resilience of the Urban Poor presented a new cooperation initiative which targets the most vulnerable. The initiative, coordinated by UN-Habitat, aims to build resilience of an estimated 600 million slum dwellers at risk of the impacts of the climate crisis. Slum Dwellers International (SDI), the Government of Kenya, ICLEI, the Minister of Environment of Turkey, the Government of Brazil and ARUP all had interventions to raise awareness regarding the importance keeping people first, especially those most vulnerable, at the center of climate action. Remarks regarding the Initiative by the Prime Minister of Fiji, H.E. Frank Bainimarama, were delivered, stating “Hand in hand with UN-Habitat, Fiji is working to reshape the destiny of the urban poor. Too often, those living in informal settlements around the world are left voiceless, deprived by the lack of resources and vulnerability.”

UN-Habitat ED also addressed the Sustainable Innovation Forum where climate leaders, mainly from the business community, reflected on the current state of innovation and made commitments in parallel to the COP25. In a full room of business and social entrepreneurs, Ms. Maimunah Sharif explained her key role as a former Mayors and Executive Director, stressing the need for effective leadership, accountability and inclusive dialogue with citizen to lift climate action, making the case for women leadership and engagement. “Cities that are built for women are built for everyone” she said, largely applauded by the floor. She appealed for more catalytic partnerships with the private sector to “forge partnerships with the private sector to help future-proof our cities though innovation”.

UN-Habitat and the Economic Commission for Latin America (ECLAC) hosted national and local government representatives from the LAC and Africa regions at the South-South and Triangular cooperation in the implementation of the New Urban Agenda event. The event served as a platform for representatives to discuss the need for governance frameworks, which support effective partnerships and shared responsibilities among different levels of government, communities and other stakeholders, and help drive shared priorities. The New Urban Agenda was positioned as an important accelerator of the 2030 Agenda and the Paris Agreement on Climate Change. The panel was composed by Felice Zaccheo- Head of LAC Unit – EU DEVCO, Mahala Molapo- Minister for Local Government and Chieftainship (Lesotho), Dhadho Godhana- Governor of Tana River (Kenya) , Jorge Yunda- Mayor of Quito (Ecuador) and Patricio Morera, Vice Minister, Ministry of Housing and human Settlements, (Costa Rica). The session was moderated by J.L. Samaniego, Director of Sustainable Development Division UNECLAC and Roi Chiti, LAC Regional and Interagency Coordinator, UN-Habitat with closing remarks from Executive Director Maimunah Mohd Sharif. 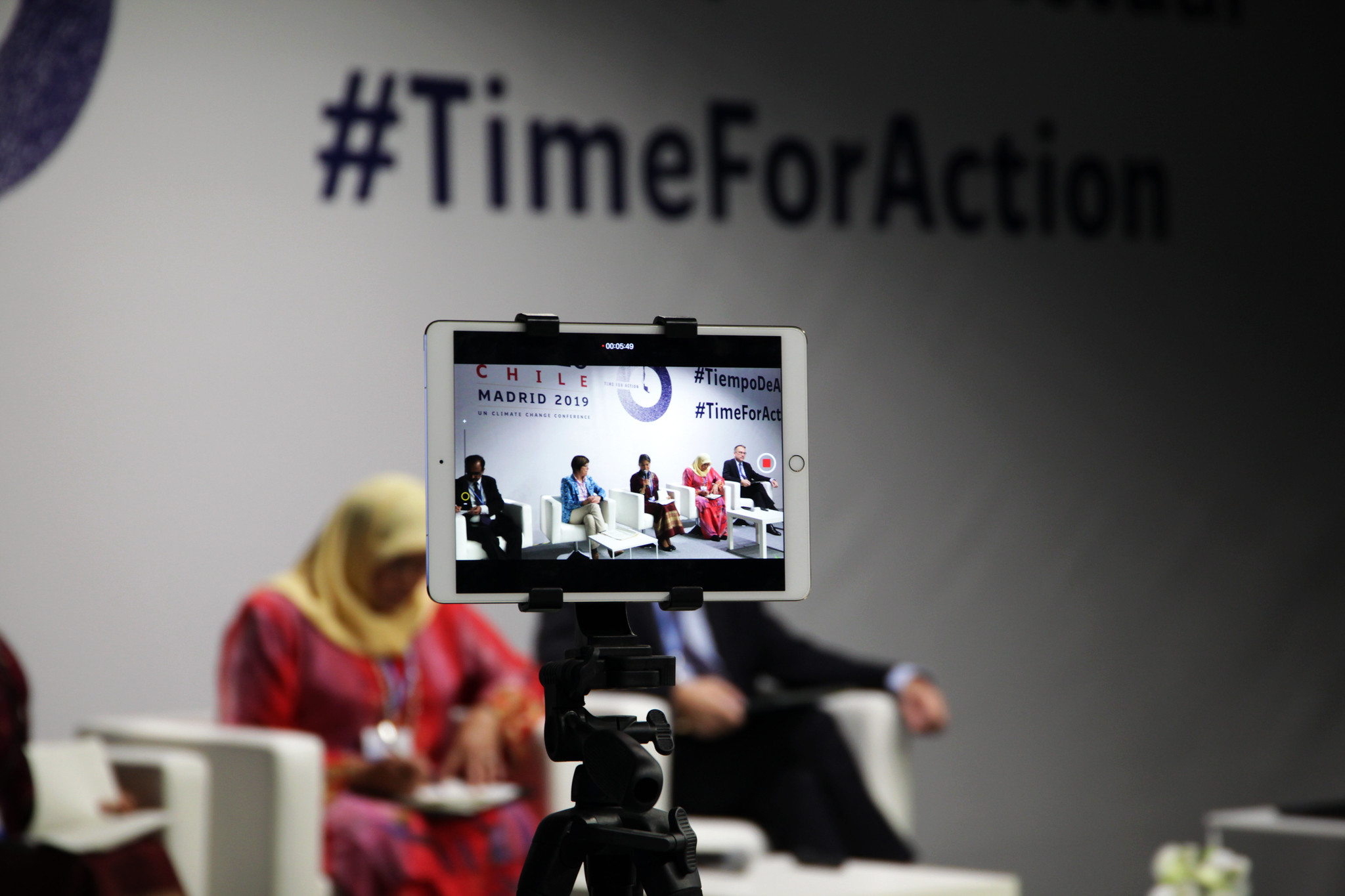