UN-Habitat Executive Director, Maimunah Mohd Sharif said: "The world has really changed since the first World Urban Forum back in 2002. Urbanization is now recognized as one of the defining trends of the times. But ultimately the aim has remained constant – to promote transformative change to improve living conditions for everyone.”

The theme of the World Urban Forum this year is ‘Cities of Opportunities: Connecting Culture and Innovation’. Culture which brings together knowledge, art, belief, capabilities, habits, morals and behaviours is widely recognized as playing a key role in the growth and development of cities.

Alongside High Level Dialogues and Round Tables, there are Assemblies for young people, women, local and regional governments, grassroots communities and business, as well as 400 events hosted by partners including an Expo, a Sustainable Development Goals (SDG) Zone, an Urban Library and the UN-Habitat Better Cities Film Festival.

A Special Session on Voluntary Local Reviews, hosted by UN-Habitat and the City of New York will discuss how cities can report their progress towards the SDGs, share best practices and encourage new cities to join the movement.

Some 50 Mayors and Governors have registered to take attend from cities in Africa, Europe, Asia and South America from Afghanistan to Zimbabwe. A similar number of Ministers have already registered along with high level representatives from 15 UN agencies and several award winning architects.

There are only ten years left to achieve the SDGs by the target date of 2030. WUF10 will be the first major UN event in the Decade of Action which starts this year and calls for accelerating sustainable solutions to the world’s biggest challenges.

Registration for WUF10 is open to everyone and free of charge and is open online until 31 January 2020.

For more information go to wuf.unhabitat.org 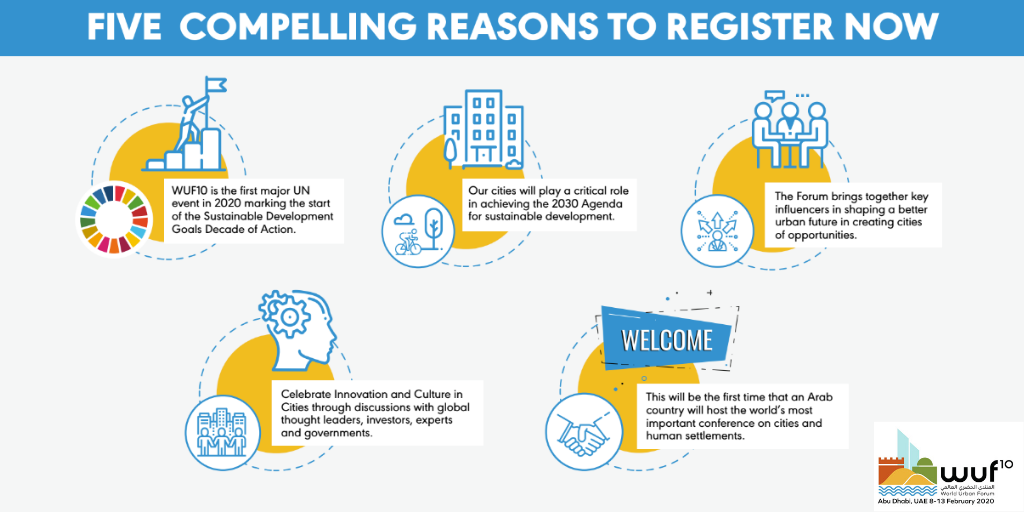