Nairobi, 6 January 2020—The year 2019 marked the 30th anniversary since participatory budgeting (PB) was first implemented in Porto Alegre, Brazil. Since its first implementation, UN-Habitat has recognized it as a powerful governance mechanism for urban settlements around the world, granting Porto Alegre's PB a prize for best urban governance practice. Over the years, PB has been increasing not only in scale but also in size, in cities around the world, e.g., Madrid and Paris, the total allocated budget is up to €100 million per year.

With the objective of providing technical support to local governments for improving governance through a participatory decision-making process of deciding public finances, the Participatory-Habitat Initiative was initiated in 2019 by UN-Habitat's Urban Economy and Finance Branch (UEFB). UN-Habitat, with this Initiative, will take PB to new locations throughout the globe to accelerate the implementation of the 2030 Sustainable Development Agenda, and the New Urban Agenda.

The Initiative aims to offer partner governments a practical solution through a digital platform that integrates public finances, citizen participation, and available information and communication technologies (ICT). This Initiative allows citizens to create and vote online for proposals of how to use part of the public budget --meaning the concrete implementation of several projects-- in a digital participatory budgeting process. However, citizens also in person can participate.

UN-Habitat using the Initiative's digital platform has created an innovative platform through which the PB process and its many features can enhance the participatory experience of both citizens and government. Citizens can find many resources – videos, publications, and news – in the digital platform to help them create proposals connected to the 17 Sustainable Development Goals. They can also interact and see what other proposals are being created by counterparts in their city. Governments can reach out to their citizens, creating a channel to exchange and receive the relevant information to improve governance and prioritize areas of investment in accordance with citizen's preferences. Additionally, as using digital technologies, the Initiative contributes to the collection and analysis of crucial data that is fundamental for evidence-based policies that are consistent with reality.

In November 2019, the Municipality of General Escobedo in Mexico signed a two-year cooperation agreement with the UEFB/UN-Habitat to launch the Initiative for two consecutive cycles: 2019-2020 and 2020-2021. In the first year, citizens will have the chance to propose and vote for ideas that tackle environment and climate change, urban mobility, and public security issues in the municipality, backed with a 25 million Mexican Pesos Budget.

With its focus area on the environment, General Escobedo becomes one of the first cities in the world to put in practice a policy answering civil society claims for climate change action after the United Nations' 2019 General Assembly. https://escobedo-pb.unhabitat.org/

In 2020, the Initiative is expected to expand to new cities in the Latin America Region as well as in other UN-Habitat partner member countries globally. 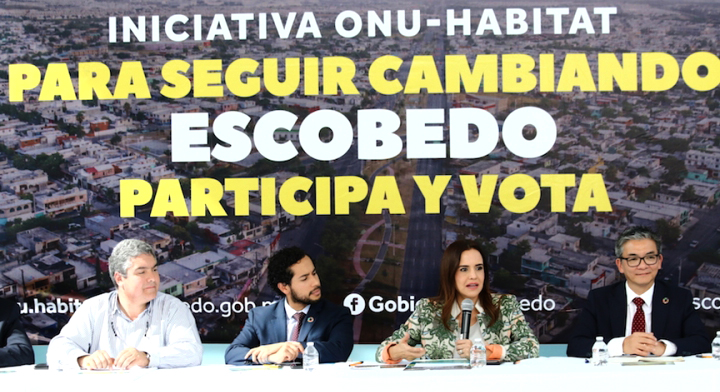