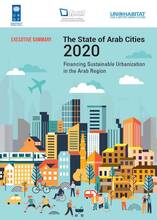 The previous and first State of Arab Cities Report in 2012 was a groundwork publication that mapped the broad facts and trends of urbanisation in the region, as well as the historic background to the Arab region’s significant urban heritage. However, the world has changed even in the relatively short period since 2012, in some startling ways that are especially challenging to many countries contained in this report.

In its second edition, The State of Arab Cities report 2020 is driven by a sense of urgency around the headlong expansion of urbanization, in an area where more than two-thirds of the population will reside in cities by the middle of this century. In 1950, just two cities of the region had a million people, whereas by 2025 this is expected to reach 31. At a time whereas many Arab countries are undergoing major infrastructure initiatives and the proliferation of new cities, it is particularly useful to examine the role played by urban infrastructure in shaping the region as a whole and influencing its urban future.

The State of Arab Cities report 2020 argues that infrastructure answers two immediate and long-term needs. Firstly, the smart reordering of decentralised municipal finances to build, maintain, and retrofit infrastructure is one of the most narrowly pragmatic and achievable interventions possible for governments and municipalities, with some highly effective small and large-scale examples from across the spectrum of the Arab region.

Secondly, the report suggests that in a region of 22 countries often beset by social tension, exclusion, poverty, and conflict, the planning and implementation of infrastructure augments peacebuilding, stabilization, and legitimacy and inclusion, as citizens participate in shaping the environment of their cities. Infrastructure, as this report argues, can either be a vehicle for political and social exclusion that cements narrow conceptions of the city, or the engine for political and social inclusivity so vital for the region’s women and young people, as well as groups like persons with disabilities, migrant workers, and minority religious and ethnic groups whose human capital and contribution are often wasted through marginalization.