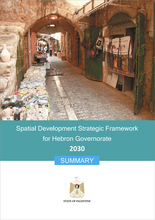 As part of the European Union funded project: “Fostering  Tenure  Security  and  Resilience  of  Palestinian  Communities  through  Spatial-Economic Planning Interventions in Area C (2017-2020)”, implemented by UN-Habitat, in partnership with the Palestinian Ministry of Local Government (MoLG), the Spatial Development Strategic Frameworks, also known as city-region plans for Hebron, Ramallah and Al-Bireh, and Jerusalem governorates have been launched after more than 12 months of extensive participatory processes with key stakeholders.

The city-region plans are representative of the creative spatial planning solutions being developed in Palestine, combining the strategic development dimension with the spatial considerations at the governorate level. Importantly, the plans are a critical component in the realization of the National Spatial Plan (2050), noting that the plans are harmonized with the National Policy Agenda (2017-2022) and are considered the founding basis for the National Urban Policy for Palestine.

The plans aim at fostering urban and rural development linkages from a spatial perspective, whilst also accommodating for population growth and examining fit-for-purpose arrangements for social services. 71 per cent of Palestinians are living in urban settings and the rest are living in refugee camps and rural hinterlands. The rural areas are primarily designated as Area C and represents 60 per cent of the land in the West Bank. Israel retains control of security and local development related functions, including planning and land management.

The plans offer a platform through which the private sector, international organizations, and the levels of government can combine efforts and pool funding for the realization of the development interventions prioritized, benefiting approximately 1.5 million Palestinians in Hebron, Ramallah and Al-Bireh, and Jerusalem governorates.