Juba, 22 October 2014 - Random spatial growth, unplanned urban expansion as well as an increasing rural-urban migration are some of the most pressing issues mayors in South Sudan are grappling with, the country’s second national urbanization conference heard last week. Most of the mayors and town clerks who spoke at the Mayors’ Round-table were of the view that the national government should help them address these issues.

Mayor Martin Odeki of Eastern Equatoria set the tone for his colleagues when he said some of the problems in South Sudan towns were unique. “In my town we are dealing with an influx of refugees and apart from hosting them we must also need to do peace messaging which we are currently undertaking through radio.

All this requires resources,” he said. The other issues the mayors discussed was that of the challenge of urban spatial planning and development, non-existent central business districts within their towns and the challenge of urban transport. In his contribution the Mayor of Bor Nhial Majok Nhial said there was need for stricter by-laws. “People just wake up and engage in all manner of enterprises on their buildings and as city fathers were usually left feeling helpless because we cannot stop them,” he said. A joint initiative of the Government of South Sudan and supported by UN-Habitat and the European Union, the ‘Effective Urbanization and Good Land Governance for Sustainable Economic Growth’ conference will run until Saturday.

It has brought together national government officials, Ministers for Planning and Infrastructure and top ministry officials from all the 10 states of South Sudan as well as development partners, academia and other stakeholders. In a presentation that was well received by the audience Themba Phekathi and Christian Okafor from UN-Habitat presented the draft National Urban Policy, giving the background and the way forward for its implementation.

While officially closing the meeting, the Minister for Lands, Housing and Physical Planning Catherine Juan Benaiah promised that her government would implement the recommendations put forward. Meanwhile, the South Sudan government has been urged to tap into the large community it has in the diaspora in order to encourage faster and better urbanization. In an interview Ms. Anyier Thon, a returnee from the United States and who now works with the Ministry of Interior said good motivation would see these people come back home.

“I personally know quite a number of professionals who given the right motivation would gladly , move from the United States and Europe to come back home,” Anyier said. She should know. Anyier was born in Ethiopia, had early education in Kenya before moving to the United States where she had secondary and tertiary education. 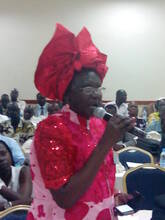