Slum Upgrading is all the rage in Kenya’s Kilifi County

Kilifi, Kenya, 24 September 2014 – Caleb Omondi is a music producer whose ears are always alert looking for the next talent he is going to release to the Kenyan public. The 30 year old father of one says because of the nature of his work, he is often required to work late arriving home in the dead of the night.

This is not a big deal if you are living in a safe environment. However for Caleb the issue of safety is a crucial one. Caleb lives in Mtwapa, a sprawling slum in Kilifi County in Kenya’s coastal region, some 500 kilometers from Nairobi. It was due to this safety concern that Caleb wholeheartedly embraced the Participatory Slum Upgrading Programme (PSUP) initiated by UN-Habitat and which seeks to improve the living conditions of Mtwapa residents.

“When I heard about this project through our local village association I was delighted. We have very many problems in Mtwapa including blocked drainages, poor waste disposal and scarce job opportunities which bites the youth the most,” he says.

Through PSUP that targets Mtwapa, Caleb hopes that most- if not all- of these problems will be a thing of the past and that the next generation of the area residents will grow up in a more secure environment. And this optimism from Caleb seems infectious and talking to the people of Kilifi- from slum dwellers up to their leaders- the picture that forms is of a people who believe they have finally hedged their bets on the right horse with high hopes for better lives. And that horse is the PSUP.

In 2010, Kenya enacted a new constitution which devolved most services from the centralised government in Nairobi to county governments. The 47 counties created in the new dispensation came into effect last year, Kilifi being one of them.

The Participatory Slum Upgrading Programme aims to strengthen community, city and national key stakeholders' capacities in participatory slum upgrading in Kenya and is being implemented in partnership with the Ministry of Land, Housing and Urban Development (MoLHUD), the County Government of Kilifi (CGoK) and the community of Mtwapa in Kilifi County.

The pilot activities are being undertaken in Mzambarauni and Kwa Goa settlements within Mtwapa and will benefit over 20,000 people. In general the Country Team aims to contribute to the development a national slum upgrading and prevention strategy through lessons learnt from the multi-stakeholder pilot programme in Mtwapa while improving inter-sectorial coordination on slum upgrading and prevention programmes and activities at both national and local levels. It is a tripartite project that has seen the European Community contributing USD 650,000 and the government of Kenya putting in additional USD 250,000. UN-Habitat is the implementing agency in close collaboration with the Ministry of Land, Housing and Urban Development (MoLHUD).

The projects consist of slum upgrading initiatives in the neighborhoods of Majengo and Mzambarauni. A One Stop Resource Centre where residents can access community information and services that include health and economic development will also be set up. The centre will also host an e-participation platform that will enable community members, local government, and local organizations and other interested parties to share experiences and ideas, keep track of development programmes as well as request for feedback on matters that relate to service delivery.

PSUP to help with urban development

Mr. Jilani Mwabonje is the chairman of the Mzambarauni Residents’ Committee. A Mtwapa old timer, he says he has seen the township evolve from a small layby for those coming from Mombasa and heading further north to Kilifi, Malindi and beyond to a thriving hotchpotch of cultures.

With this steady growth has come various challenges, Jilani says. “We have serious infrastructural problems here. Coupled with this are lack of adequate sanitation facilities and its twin problem of lack of water. Our women and children have to walk long distances searching for water and these impacts negatively on the family life,” he says, adding that he wishes there was a component to include a dispensary in the project. Currently, he adds, the residents have to carry sick family members over long distances in search of medical attention.

According to the RC chairman, there was need for closer cooperation among all those concerned to make PSUP a success. “We must sensitise our people that this project is for their own good. And we must also underscore the need to look at this project purely from the value it adds to our lives. We must stop the culture of looking at everything from a political angle because if we do that the project will not have the across board consensus it needs to succeed,” he says.

Political leaders at Kilifi County Government headquarters seem to be in agreement with Jilani. Mr. Kenneth Kamto is the Deputy Governor and in an interview in his office he says he is committed to seeing the project come to a conclusive end.

“The problem of chaotic urbanisation cuts across all the counties in Kenya but in Kilifi we are leading in efforts to address this problem. This is because of the fact that we find ourselves in the unenviable position that we have slums almost upto village level. This has been occasioned by historical injustices where you find that someone living in the Middle East has the title to a huge plantation meaning the rest of those living on that piece of land are just but squatters. According to Mr. Kamto, one of the ways of tackling the slum menace was to seek to ensure the residents have security of tenure for the pieces of land where they live.

The Deputy Governor says his government has benefited a great deal by involving the citizens in decision making. “The constitution is very explicit that we must involve all stakeholders and this is why we are always seeking the views of the citizens on any project we are embarking on,” he says.

Mr. Ken Kazungu is the county director of planning and he agrees that involving the citizens is the way to go. “We are always holding town hall meetings and it is these deliberations that inform the way we run the business of the county,” he says. 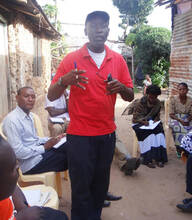