Medellin 11 April 2014—A record 22,000 people had attended the Seventh Session of the World Urban Forum (WUF7) as it came to a close in Medellin Colombia on Friday evening with many describing it as the best ever Forum so far.

Speaker after speaker paid glowing tribute to the Local Organising Committee and the Mayor of Medellin Mr. Anibal Gaviria, as well as the government and the people of Colombia for what they described as a well organised forum, warm welcome and challenging debates. “This success is for the people of Medellin and Colombia as a whole,” Mayor Gaviria declared. “Ten successive governments have been very supportive of the transformation of Medellin and I am challenging other Colombian cities which want to have similar positive changes to come to us for advice,” he said.

At the closing ceremony, winners of the Scroll of Honour Awards were feted by the high table which included Mayor Gaviria, Governor of Antioquia Mr. Sergio Farjado, Housing Minister Mr, Luis Felipe Cardona and UN-Habitat Executive Director Dr. Joan Clos. The winners were the UPP Social Programme of the Municipality of Rio de Janeiro in Brazil, People’s Government of Shouguang in China and the Ministry of Urban Development of Ethiopia. Others were Suwon City of the Republic of Korea, the Community Led Infrastructure Facility (CLIFF) of the United Kingdom and Ms Diana Deacon. In his message Governor Farjado named corruption as the elephant in the room. Alluding to the successful war against gangs and cartels which Antioquia in general and Medellin in particular had waged, Mr, Fajardo warned that that could be a walk in the park when compared to corruption. “Corruption is harder to fight than guerrillas,” he said.  Minister Cardona also talked of the same theme saying that it was determination that had seen the image of Medellin and Colombia changed from that of destruction to transformation.

Dr. Clos concluded that the meeting was a resounding success. “Let us use what we have learnt to change the cities of the world,” he said. At a press conference earlier in the day, Dr Clos urged partners to support a stand-alone urban goal in the Sustainable Development Goals as they work towards the Third UN Conference on Housing and Sustainable Urban Development (Habitat III) in 2016. 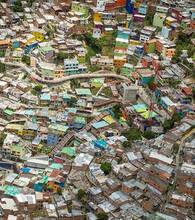