Creating Engagement in Public Spaces for Safer Cities for Women

The rapid pace and nature of urbanization taking place throughout the world has thrown up new challenges for governments, and their populations as well as social scientists and activists. Urban spaces provide new opportunities for people to build their homes and lives, but at the same time reinforce existing inequalities and often create new ones. Gender is a central axis of discrimination along with poverty, disability and other vulnerabilities. While violence and fear may have impacts on the whole population, marginalized groups are much more vulnerable. Women face the fear of sexual violence as a constant threat to their ability to move around, to work and their general well-being.

There is increasing concern about women's safety in cities over the past few years. The fear of violence in public spaces affects the everyday lives of women as it restricts their movement and freedom to exert their right as citizens of the city – freedom to move, study, work, and leisure. Women, particularly those living in low income settlements, feel unsafe in their settlements after dark as the areas are poorly lit, the streets are not well paved, the drain water overflows on the streets making it tough for them to walk, and the bus stops are often located in a corner of the settlements – forcing them to walk in the dark streets.

Creating safety involves much more than just responding to violence. It is important to create the conditions by which women are able to move about safely and without fear of violence or assault. Fear often plays a key role in women's experience and access to the city. Therefore in order to create greater levels of safety and comfort, both actual violence and the fear of violence need to be addressed. Research has shown that many factors play a role in determining women’s access to the city including urban design and planning, community involvement, improved policing, usage of space etc.

Keeping this in mind, we developed the mobile app and online platform Safetipin which collects information on public spaces through a safety audit that can be done by anyone, anywhere in the world. In cities everywhere in the world, women's safety in public spaces is becoming a growing concern. Safetipin is a free app and can be downloaded from the App store or Google play.

Research from different parts of the world show that women face sexual harassment on a regular basis in cities. In India, certainly the gruesome rape and murder in December 2012 has changed public perception of women's safety and we find both greater reportage of violence and improved response from stakeholders. At the core of Safetipin is the safety audit that measures nine parameters including lighting, the state of the walk path, as well as the presence of people and specifically women, on the streets and 'eyes on the street'. Each audit appears as a pin on the map and is used to compute the Safety Score of an area.

Safetipin has been designed both as a tool in the hands of individual women who can access information about safety in the city and as a method of collecting data on a large scale for city authorities to use for better planning and governance. An individual user can conduct a safety audit, pin places where she feels unsafe or has faced any form of harassment. She is also able to see all the information that has been uploaded by others and make informed decisions about moving around the city safely. Women (and men) can see the Safety Score of any place in the city and can also use it when they visit new cities.

But Safetipin also seeks to collect large scale information for helping city stakeholders improve safety using data. For the city authority, Safetipin provides large scale data that is crowd sourced and also provides a platform for interaction with citizens on their safety concerns. For example, there are over 6000 audits in the city of Delhi and this has been shared with police, transport and other stakeholders.

In order to help city governments, we are collaborating with UN-Habitat to collect data and address women's safety in three cities - Bogota, Nairobi and Delhi. The data will be shared with key city stakeholders to ensure that it can feed into initiatives and programs to improve safety. Further, a second round of audits can be conducted to measure the change and impact of programs.

Currently we have data and safety audits in nine Indian cities. The App has also started to be used in Jakarta, Indonesia and Bogota, Colombia. Currently it is available in four languages - English, Hindi, Spanish and Bahasa. We plan to increase this as more cities join the network. We are hopeful that the data that is collected will be useful for city planners to make safer cities for women around the world. 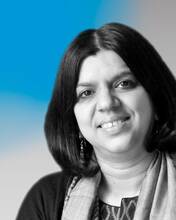 Dr. Kalpana Viswanath is a researcher who has been working on issues of violence against women and safer cities for women for over 20 years. She has led research studies on violence against women in public spaces in the city. She is the co-founder of SafetiPin, a map-based mobile personal safety app. SafetiPin features a robust personal safety tracker that acts as a personal guardian and enables users to quickly call for help in case of crisis and aggression.
Categories
MEDIA CENTRE