Brussels, 24 April 2014: The important relation between public space and culture and the significance that it has for people, prosperity and peace were strongly emphasised at the fourth European Union-Africa Summit that took place earlier this month. The comments were among several recommendations made at a side-event at the Summit, Visionary Urban Africa, organised by BOZAR – the Centre of Fine Arts in Brussels - and UN-Habitat with the objective of defining priority interventions that need to occur in cities to contribute to a more sustainable, inclusive and creative urban environment. Based on the findings presented in the State of the African Cities Report 2014, commentators found that urban development in Africa should focus on designing new and creative models of spatial planning to ensure viable, peaceful, and vibrant cities. Several recommendations were made to the European Commission President as well as to policymakers and stakeholders for future initiatives on urbanization and cultural spaces in African cities. Participants worked towards identifying the needs and priorities of African cities to better inform the European policy towards Africa and to stress the role of culture as a key element in the shaping of urban space. Furthermore, there was a general agreement on the role of public space as a cultural exchange arena and a catalyst of democracy. This event comes in the context of a renewed European Commission’s interest in the role of cities to support sustainable development. The President of the European Commission, J.M. Durão Barroso, stressed the pertinence of this event as a complement for the EU-Africa Summit and stated that “developing the connection between culture and urban development is a common goal in Europe and Africa.” 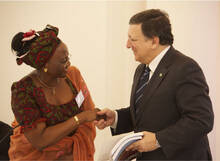