Prosperity for all enhancing the informal economy through participatory slum upgrading 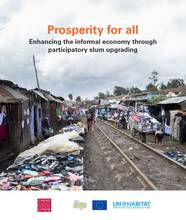 This report is timely in contributing to global development agendas, particularly SDG 11, and the New Urban Agenda (NUA), which commits special attention to upgrading slums and informal settlements, and to recognizing the contribution of the working poor in the informal economy.  This report stems from UN-Habitat Governing Council Resolution 24/11, which seeks to strengthen the UN-Habitat’s knowledge base by documenting and disseminating good practices and tools on urban small-scale and informal economies.

The report has been developed by Cardiff University and UN-Habitat’s Participatory Slum Upgrading Programme (PSUP), to provide innovative and enabling frameworks that support city-wide and participatory slum upgrading. Under PSUP, Community Managed Funds – a key innovation – dedicated a percentage of overall upgrading funds to community-initiated projects through a revolving fund, which to date has led to improved living conditions for over a quarter of a million people.

The report looks at the intersection of slums and informal settlements and the informal economy, to raise awareness amongst communities, local authorities, NGOs and other urban actors of the potential of the local economy in informal settlements – much of which is also informal – as a key component of participatory slum upgrading, to contribute to economic development and poverty reduction.