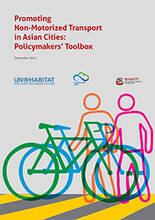 Parallel to urbanization, Asia is undergoing rapid motorization. Asia is now home to around half a billion vehicles. It has been estimated that by 2035, both the vehicle population and motorization index will at least double in the Association of Southeast Asian Nations (ASEAN) region, China and India from current levels (2012). In many countries, vehicle growth rates are higher than gross domestic product (GDP) growth rates. Despite projected high number of vehicles for 2035, the projected motorization index for Asia will still be considerably lower than the current motorization index of the developed world.