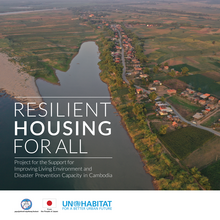 Cambodia is one of the world’s most vulnerable countries to natural disasters and has suffered repeatedly from floods, storms and strong winds which have caused the loss of lives and destruction of livelihoods.

In 2018, due to the heavy rainfall from Tropical Storm SON-TINH, the Sepa-Nam Noi dam in Lao PDR collapsed affecting 62,317 households residing near the Mekong river. The massive floods caused 16 deaths and forced 5,398 households to evacuate in the five downstream provinces in Cambodia. The rural poor communities near the river suffered the destruction of their houses. Many families were forced to evacuate their homes to the temporary shelters with no sufficient food and access to clean water and sanitation.

To support the recovery process and strengthen climate resilience of the population affected by the floods, UN-Habitat in collaboration with the Royal Government of Cambodia implemented the “Project for Improving Living Environment and Disaster Prevention Capacity in Cambodia” (April 2019 – March 2020) with grant aid from the Government of Japan.

The project was completed with the reconstruction and rehabilitation of 202 houses with 1,098 people in the target area of Cambodia. It also benefited nearly 10,000 people through a wide range of capacity building activities related to disaster risk reduction (DRR) and water, sanitation, and hygiene (WASH).