Informal settlements are a global urban phenomenon. They exist in urban contexts all over the world, in various forms and typologies, dimensions, locations. While urban informality is more present in cities in developing countries, housing informality and substandard living conditions can also be found in developed countries.

Currently, there are around one billion slum dwellers worldwide, compared to three quarters of a billion in 1996. If curative and preventative policies are not initiated, sustained and up scaled, this is expected to increase threefold by 2050. The continued existence of informal settlements is directly linked to the persistence of poverty and inequality, distorted land markets, excluding people from decent work and livelihood to attain individual and collective progress and prosperity.

People living in informal settlements are particularly vulnerable to spatial, social, and economic inequalities, dependence on precarious income generation and livelihoods, poor health as well as lack of affordable housing, high vulnerability to the adverse impacts of poor and exposed environments, climate change, and natural disasters. The recently adopted Agenda 2030 for sustainable development and especially a new transformative urban agenda will have to address the above challenges taking stock of the shortcomings and achievements of the previous development frameworks and approaches. 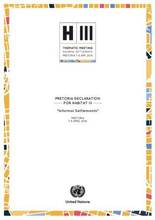