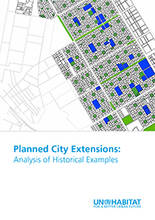 Developing countries are urbanizing at an incredibly fast pace and, in many cases, with unplanned settlements that pose enormous challenges. Growing cities need to define the urban planning frameworks that will guide the construction of new neighbourhoods and city extensions.

This document, through the analysis of ten existing cities, draws lessons that can be useful for future urbanization. The cities presented are apparently very different: they are in developed or developing countries; they were been built in the 17th or 20th centuries; they are neighbourhoods or complete cities; they house the rich and the poor. However, they also have common aspects that serve to define and explain an approach that can guide future urbanization so as to generate cities that are sustainable, socially inclusive, and economically viable.