Tacloban City, Philippines 31 October 2014-- In the afternoon of October 23, 2014, droves of teens and young adults headed to the Balyuan Grounds in Tacloban City despite gray skies, puddled pavements, and light but steady rain for Kabataan: Kasugbong Ha Pag-uswag (Youth: Partners in Development) – a youth jam for safe and resilient cities.

The youth jam, organized by the city government in collaboration with UN-Habitat and UNICEF, was a one-day series of activities designed for Tacloban’s youth to express themselves in terms of urban issues and needs relevant to them and what they felt empowered to do about these issues and needs.

Among the initial series of activities, which started around two in the afternoon, was Project DIY. Participants were told to bring old, worn-out items to be made over with a spread of various art and craft materials made available to them. Volunteer facilitators from Tacloban youth groups YHES and PYAP were at the ready to assist participants in painting and embellishing their old shoes, shirts, bags, and other knickknack just waiting for a new lease on life.

Sharing a tent with the Project DIY area was the Chika Muna Ball Pit. “Chika muna” loosely translates to “let’s chat a while” and was a fun and casual way to engage the youth in a dialogue about questions and issues that the city’s youth groups themselves came up with, among which were the following: What was your first greatest pleasure after Typhoon Haiyan? If you were a lawmaker, what law would you pass for the betterment of the family? What are top five things you wish you could do with your mother?

Some yards away under another tent, people were busily hunched over chalk and black board for the Photo Pledge Photobooth. People had their pictures taken – complete with wacky props and wigs – holding up black board signs on which they scribbled the small but personal efforts they promised to make for the betterment of their family, community, or city.

These tent activities went on until about four in the afternoon, after which a flash mob bust out of the crowd and started dancing to hiphop music throbbing from the sound system. This signaled the start of the program and ABS-CBN’s Cholo Guy, the event’s emcee, urged people to start settling into the seats across the stage.

Mayor Alfred Romualdez, decked in a bright orange wind breaker, walked onto the stage sans umbrella to address the youth with a few words on resilience and the paradigm shift that was needed to thrive amid climate change. City councillor Cristina Gonzales-Romualdez spoke next on the value and relevance of such youth-oriented events, stressing the youth’s role in securing Tacloban’s future. UN-Habitat Country Programme Manager Cristopher Rollo also took to the stage later on to discuss the youth’s role in resilience-building.

Student bands and dance troupes performed as work on the walls continued well into the damp sunset, proving that the youth want to be more than bystanders in their city’s development, and that if given the opportunity, they would gladly make themselves heard, seen, and understood rain or shine. 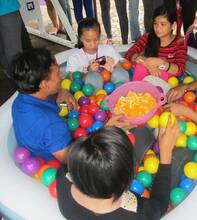 Chika Muna Ball Pit: Tacloban’s youth easily overcame their shyness once discussions became emphatic and served as a lens to real issues that affected them. In a matter of minutes, a crowd had formed, excitedly waiting their turn at the ball pit.
Image 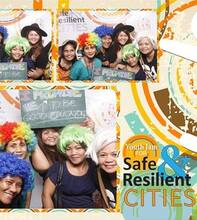 Photo Pledge Photobooth: Pledges ranged anywhere from more general themes like “I promise to be strong and resilient” to more personal statements like “We promise to be good educators.”
Image 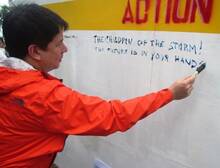 Inaugural mark on the freedom wall by Mayor Romualdez: “The children of the storm! The future is in your hands!”
Categories
News