Manila, 11 July 2014 – The Philippines has been conducting a series of extensive sub-national and national consultation workshops since April this year with diverse urban actors such as national government officials, local authorities, civil society, private sector, academic institutions and all relevant interest groups as it prepares its National Report for Habitat III.

Habitat III is the Third United Nations Conference on Housing and Sustainable Urban Development which takes place in 2016. Habitat Conferences are convened every twenty years to discuss and chart new approaches in response to the challenges and opportunities of urbanization and the implementation of the sustainable development goals.Chaired by the United Nations Human Settlements Programme (UN-Habitat), the Conference evaluates urban and housing policies affecting the future of cities from a global governance perspective. Habitat III will be one of the first global conferences after the Post-2015 Development Agenda with a view to generate a 'New Urban Agenda' for the 21st century which recognizes the increasingly dynamic changes of human civilization.Under-Secretary Celia Alba, Secretary-General of the Housing and Urban Development Coordinating Council (HUDCC) and Chairperson of the multi-agency National Steering Committee established to prepare the Report, said that all efforts have been explored to ensure that the eventual Philippine Habitat III National Report will be a product of a collaborative effort among a broad representation of urban actors who generously contributed their expertise in the sub-committee reports, regional and national consultation workshops, expert group meetings and reviews, among others.The Report will tackle the initiatives in addressing the priority concerns identified in Habitat II (Istanbul 1996) and the lessons learnt during its implementation. It will mainly cover comprehensive discussions on the issues and challenges of urban demographics, land and urban planning, environment and urbanization, urban mobility, urban governance and legislation, urban economy, housing and basic services and will outline the country’s plan of action to respond to the challenges and opportunities of urbanization.

Throughout the consultation workshops for Habitat III, Christopher Rollo, UN-Habitat Philippines Programme Manager, highlighted the agency’s partnership with the government and development partners in promoting sustainable urban development in the country which has been strengthened through various projects like the Achieving Sustainable Urban Development (ASUD) and the Cities and Climate Change Initiative (CCCI) of which several Philippine cities are among the pilot cities for many global initiatives.The UN-Habitat Philippine Office provided technical support to the preparation of the Habitat III Philippine Report which, upon endorsement by the HUDCC Council, will be submitted by the Philippine government to the Habitat III PepCom in New York by August. 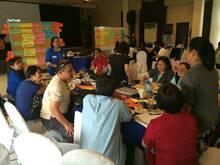