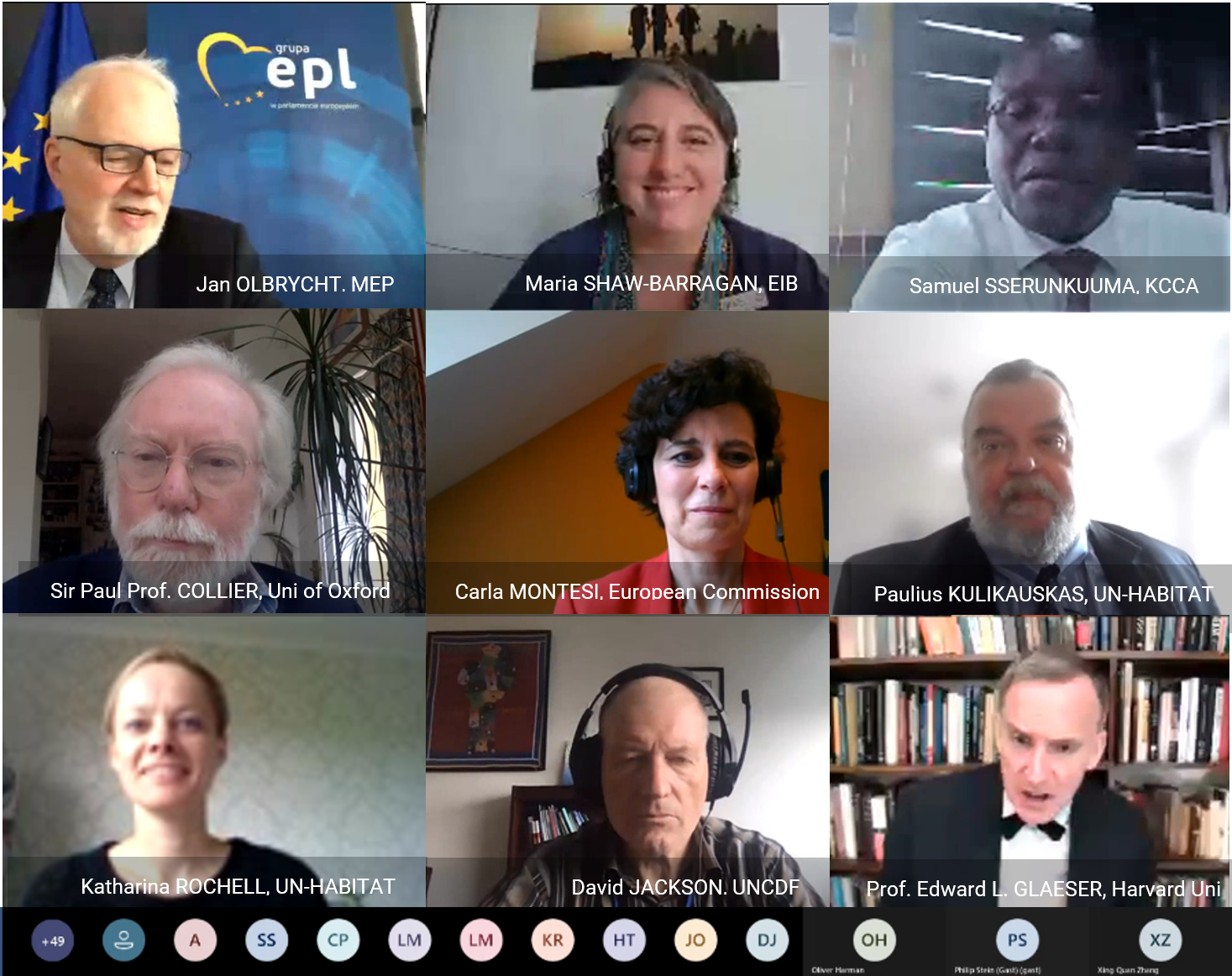 European Parliament, Strasbourg, France 26 May 2021 -  As requested by the European Parliament, the European Commission, European Investment Bank and UN-Habitat, supported by the International Growth Centre, are working on a pilot initiative to identify measures helping mobilize financing for urban development at all levels of government, entitled “Supporting the urban dimension of development cooperation: Enhancing the financial positions of cities in developing countries to achieve sustainable urban development”.

Jan Olbrycht, MEP and President of the URBAN Intergroup of the European Parliament, and host of the meeting, opened the meeting by recommending the results of the pilot initiative, which he started with UN-Habitat in 2016. “Supporting the proposal was a good choice because it led to interesting results. It showed there is no one-size fits all solution, and showed the importance of integrated urban and investment planning, and that investments can lead to building of the institutional system.”

A next step of the initiative proposed by Jan Olbrycht, entitled “Revised priorities and modalities of financing supporting response to population surge in low-income countries in sub-Saharan Africa”, is currently being assessed by the European Commission to prepare concrete actions for the future.

Carla Montesi, Director, Green deal and Digital Agenda, Directorate-General for International Partnership of the European Commission, stressed that in view of the rapid urbanisation in partner countries finding avenues to finance urban development is a core challenge. How urban areas will be planned, built and financed will be key determinants of overall development outcomes and shapes the scope for achieving the high-level objectives of the EU, such as the green transition, job creation and fight against inequalities. This will require massive urban investment and she explained that the EC is working on that through scaling up financing instruments of blending and guarantees, which can help mobilize additional funds for urban investments.

Prof. Sir Paul Collier outlined the extent that urbanisation matters in the broader sequence of development. Urbanisation is the most important public policy issue because cities are where economic development overwhelmingly happens. Cities provide a highly productive environment for enterprises by providing affordable electricity and connectivity for production to take place at scale. Development is about productive clusters and value chains in cities. The productivity of a city doesn’t happen automatically. Productivity requires public infrastructure for electricity and connectivity. Making cities livable and productive is a huge undertaking that requires public policy.

Prof. Ed Glaeser, Chair, the IGC Cities that work Council, echoed that there is no pathway to prosperity that does not run through cities. GDP per capita growth and urbanization are strongly connected. Policies are required that enable cities to flourish. The global pandemic requires far more sustained commitment to cities in the developing world. Hygienic investments in history were crucial to making cities functionable, liveable and healthy. These investments however, require more than just infrastructure. Cities in developing world must build their own institutions to manage this infrastructure – sanitary and fiscal infrastructure.

This was followed by a practitioner´s view. Samuel Sserunkuuma, Director of Revenue Collection Kampala Capital City Authority, Uganda. He suggested that good practices like revenue collection activities in Kampala, in particular the computer aided mass valuation, should be better documented for other cities to learn from them. He stressed that transparency in tax collection increased compliance in Kampala.

In the final intervention Maria Shaw-Barragan, Director, Global Partners, Operations Department, European Investment Bank, said that as EU climate Bank the EIB makes huge investments for mitigation and adaptation in cities. A major challenge in Africa is that lending to cities most often requires sovereign guarantees. There are some promising examples from Africa where lending is done to the city level, providing finance backed by local revenues, for example from realizing land value in Zenata, Morocco, or supporting climate smart affordable housing in Kenya and Botswana with private sector sustainable housing funds. EIB is planning to propose a sustainable cities initiative, with the aim to de-risk urban projects in order to attract private sector investment. She ended by commending the rich analytical work and practical recommendations of the initiative, and that the EIB is willing to expand their contribution in this collaboration with UN-Habitat and other partners, because still a lot to do and the relevance and impact in this area is very important.