Birzeit, West Bank, 6 November 2017 – The Second Palestinian Urban Forum was launched on Monday, 30 October, at Birzeit University under the theme “Localizing the New Urban Agenda: Shaping the Future of Palestinian Cities”. The preliminary session for the Forum took place in Gaza City on October 25, 2017.

The Forum included several parallel and specialized sessions, in addition to two round table and training sessions on placemaking and urban economics experience of UN-Habitat in Palestine and in the world. The Forum had 57 papers that were presented by local and international experts from Italy, Germany, The Netherlands, and Switzerland as well from UN-Habitat’s headquarters in Nairobi.

“We are committed to the sustainable development goals in Palestine, despite the humanitarian crisis on the ground. Our commitment is aligned with our national policy agenda that adopted the motto ‘Citizens First’. I commend the civil, non-governmental, and governmental institutions on their work and collaboration in implementing the sustainable urban development and planning model in Palestine” said Prime Minister Hamdallah.

“We emphasize the importance of urban planning for a modern state building, highlighting and upgrading the Palestinian government’s constant work to achieve the best possible standard of life for the Palestinian people”, said Mr. Araj, Minister of Local Government.

“Urban planning is an important aspect of future development planning everywhere in the world; it aims to solve urban issues and raise the quality of life for everyone…We mark the forum as an attempt to rein in the urban rise in Palestinian cities” said Mr. Abu Hijleh, President of Birzeit University.

Mr. Peter Beerwerth, Head of German Representative Office in Ramallah noted: Urban development was among the key achievements within the German-Palestinian cooperation framework.”

“UN-Habitat is proud to be a key partner to the Ministry of Local Government in organizing this forum, which will hopefully encourage further work on localizing SDG11 and the New Urban Agenda, in ongoing efforts towards achieving more sustainable and resilient Palestinian cities and communities,” said Mr. Elshakra, Head of UN-Habitat’s Office in Palestine.

The Forum closed on October 31, 2017 by renewing the Memorandum of Understanding between Ministry of Local Government and UN-Habitat until September 30, 2020 with the aim to continue the collaboration and mutual work on issues related to spatial planning, local governance, and urban management, with emphasis on completing the National Spatial Plan for the State of Palestine.

The Forum is considered a stepping stone in preparing Palestine for the upcoming World Urban Forum in Kuala Lumpur in February 2018 under the theme: Cities 2030, Cities for All – Implementing the New Urban Agenda. 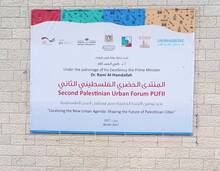