Mr. Khan thanked UN-Habitat and all contributors of this study. He emphasized that the study is important given the impact of environmental factors and climate change to Islamabad city and other cities of Pakistan. The report reveals significant changes in the intensity, frequency and variability of temperature, precipitation and floods.

In response to these findings, the study proposes 14 planning interventions for improving the climate-resilience of Islamabad. The study also provides city authorities and planners from other Pakistani cities a replicable model for city-level climate change assessment, adaptive planning and institutional response. Ms. Bella Evidente, UN-Habitat’s acting country programme manager, commended the Ministry of Climate Change for jointly undertaking the study.

The report, which is part of the Cities and Climate Change Initiative (CCCI) for Asia-Pacific is also available in an abridged version as a policy document for city planners and decisions makers. It is being distributed by UN-Habitat’s Regional Office for Asia and the Pacific in Fukuoka, Japan. UN-Habitat, as the lead United Nations agency in promoting socially and environmentally sustainable towns and cities, is fully committed to working with and supporting the Government of Pakistan and in close partnership with the Ministry of Climate Change. 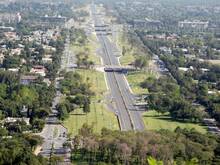