Organisation, Management and Evaluation of Housing Cooperatives in Kenya 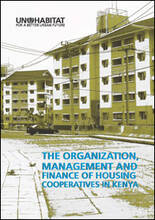 In the past fifty years, there has been an unprecedented increase in urban population which directly translates into a mushrooming of slums worldwide. In 2001, 924 million people or 31.6% of the world’s urban population lived in the slums, with the majority being from the developing regions. Indeed, it has been documented that African cities have experienced the fastest population growth rates in the World history. However, they have been unable to cope with the increasing demand for essential services like housing, health and education. As a consequence, a rapidly increasing number of urban dwellers in Africa live in poverty and reside in overcrowded slums which lack the essentials to sustain even a modest living.

It is in this regard, that housing cooperatives have become an essential means in dealing with the challenges of over-urbanization in Kenya. Several initiatives by the Government, UN-HABITAT, the public and the private sector have been underway in the establishment of housing cooperatives particularly for the low-income earners. There has also been a mushrooming of micro financing institutions to enable the formation and sustainability of new housing co-operatives.

These co-operative societies also play a significant role towards a country’s economic growth. The UN estimated that in 1994 the livelihood of nearly 3 billion people or half of the world’s population was made secure by cooperative enterprises. Indeed, in Kenya, Cooperatives employment creation amounts to 240,000 people and contributes to 45% of the Gross Domestic Product.