Opening Statement of the Secretary-General of the Conference

It is an honour for me to open the first session of the Preparatory Committee of the United Nations Conference on Housing and Sustainable Urban Development (Habitat III).

Allow me to start by congratulating the Co-Chairs of the Preparatory Committee on their election. We have an exciting two year period of preparations in front of us, and your leadership will be crucial in the debate on sustainable urban development. You will elect next the remaining members of the Bureau, so let me also extend my warm congratulations to them. On behalf of the Secretariat, I look forward to our collaboration in making this session and our work a success.

I would like to warmly welcome all the Honourable Ministers, Heads of Delegations and all the participants who have come from different parts of the world to attend this first session of the Habitat III Preparatory Committee.

I would also like to welcome the representatives of, non-governmental organizations, civil society, including grassroots organizations, women groups, youth groups, professionals and academia, foundations and private sector. I welcome you all and thank you for your continuous engagement. There are twelve side events already running, and several parallel events. Last week I was able to meet some of you in the Open Consultations prior to this session. I value the views and opinions you shared with me during these meetings.

As Habitat II was recognized as a milestone in the partners’ engagement and as we move to Habitat III, we should keep the spirit of the preamble of the Habitat Agenda, which stressed the importance of international cooperation and solidarity for improving the life of the peoples around the world.

Let me also welcome the Mayors and representatives of Local Authorities. Nearly twenty years ago, some of you participated in Habitat II. At that time I was deputy Mayor of Barcelona, and I was tasked by my then Mayor Pasqual Maragall to implement the Habitat Agenda in that local context. Mayor Maragall represented Eurocities, Mayor Sampaio represented IULA and Mayor Pierre Moroy represented FMDV at the Mayor’s Assembly in Istanbul.

It has been a pleasure to work with the mayors around the world to unite the voices of local authorities.

The world is fast becoming predominantly urban, and relentlessly so. At the beginning of the 19th century, only 2 per cent of the world's population was urban. By the beginning of the 20th century, that percentage had increased to 10. At the beginning of our decade, the world's population living in urban areas had reached 50 per cent. This rapid urbanization of the planet Earth is an unprecedented challenge in the history of humanity. In forty years, four of every five people will live in towns and cities, and ours will be an urban planet.

In comparison, it was not until 1960 that the first 1 billion people had urbanized. We have since then seen a runaway urban growth. In the 15 years between 2003 and 2018, 1 billion people will be added to our cities. Most of this growth will occur in developing regions. In fact, seven out of ten urban dwellers would be African or Asian in 2030. Beyond being a demographic phenomenon, urbanization is, in fact, a transformative force that is continually shaping societies, their economies, political systems and environments.

In paragraph 134 of the Rio+20 outcome document "The Future We Want", Governments recognized that, and I quote: "...if they are well planned and developed, including through integrated planning and management approaches, cities can promote economically, socially and environmentally sustainable societies."

An overview of urbanization from Habitat I in Vancouver 79, Istanbul 96 until now shows how every 20 years, more than 1 billion people has been added to the figure of urban dwellers, now reaching nearly 4 billion. Looking at that massive urban development, we can already extract some provisional conclusions. Urbanization has gone in parallel, altogether with economic growth. With the increased international trade, and with massive industrialization, mainly in Asia, we have seen, once again, how urbanization and development go hand in hand.

The important transformation of the world economy and society is presenting new global challenges. We can ascertain that urbanization has served well the purposes of growth, but the question is if it has served the purposes of “sustainable development”. In the last 15 years, the UN family has engaged in the Millennium Development Goals, and now we altogether are reviewing their accomplishments on the way to the Post-2015 Development Agenda.

The good news are in the reduction of absolute poverty and in some other indicators, but there is still a lot of work to be done. Specifically in our urban approach we have seen how the total number of slum dwellers has increased instead of decreased and how urban access to water and sanitation is the MDG goal lagging most behind.

Since Habitat II, a new global awareness has emerged around Climate Change, and its effects on the sustainability of the Plant and its ecosystems. Here we are cognizant of the urbanization and the global emissions of Green House Gasses. 70% of the emissions are attributable to urbanization, 40% direct and 30 % indirect.

As we proceed with the consultations on the Post-2015 Development Agenda, and we start the preparations for Habitat III, we should move away from fragmented views of sustainable urbanization. Rather, we should focus on creating a coherent view of this important phenomenon and its role in sustainable development. We need cities and human settlements that are inclusive, safe, resilient and sustainable.

Our future will be decided in cities. We are failing on how we plan, build and manage our cities. Subsequently, we are failing in creating a sustainable future for us and our next generations.

If current projections are confirmed, more than half the world's urban population will live insub-human conditions. Already today, almost 60% of the urban population in sub-Saharan Africa resides in slums without running water, minimum conditions of hygiene and without access to essential services. The proliferation of slums and informal economy are not the only obstacle in the urbanization of developing countries.

Other factors also threaten the future of cities, such as vulnerability to natural disasters, socio-political conflicts over land and resources. Many cities also fail to provide basic services to their citizens and lack functioning public transportation systems. In many countries in the global South, the current development dynamics increases social inequalities.

In developed countries, where the urbanization process is consolidated, the city also has a set of challenges. Social segregation and loss of quality of public space is threatening peaceful coexistence. Increasing mobility demand in an era of cheap energy compromises the viability of many urban areas.

The urgency of the accelerated growth experienced by cities around the world should not be an excuse to perpetuate the dominant development model of the last seventy years. Cities must grow rapidly to provide housing for over 70% of the world’s population in 2050. This is a fact. But there is no justification for urban expansion that lead us to live in more segregated, more unequal, more unfair and intolerant cities.

Because, despite the prevailing impression, cities are not the cause of poverty. They accommodate poor people because they attract poor residents in search of economic opportunities, not because they impoverish the citizens.

We should leverage our extensive experience in urban development to recover those elements that have created urban environments of equity and coexistence. Let’s get away from dynamics and models that prioritize buildings before urban matrix, and models that leave the common area at the discretion of commercial and real estate uses. The backbone of the city is good public space where citizens interact and economic activities are mixed and multiply. This public space needs to be legally protected to remain intact over generations.

From successful experiences, we have learned at least four important lessons. First, planning is essential if we are to avoid social segregation. Second, between 45% and 50% of land in urban areas must be allocated to public space. Third, public spaces should be designed properly to ensure that communities operate efficiently. Finally, the city should guarantee adequate population density and mixed use, with the aim of ensuring the necessary proximity of the factors of production.

The urbanization process should be planned for the long term, should provide an essential structure, the spine, the matrix, the pattern of what would later become the city. Nothing more, nothing less. Over time, economic activities and the various social needs will change the shape and urban land uses. But it will not change the pattern. This essential element must be defended and protected by the local authority, the repository of political legitimacy, and the rule of law. Without social and political understanding of the use and productivity of the common good, there is no capacity for planned urbanization.

This new paradigm is of vital importance in developing countries, where most of the rapid growth of urban populations will take place.It is both rational and inexpensive. As urbanizationis a source of development and not its consequence, proper planning of new towns and urban expansions is a necessary foundation for better living and greater equality and welfare in urban areas.

Although the creation, protection and preservation of the common good is always an effort of the whole community. It is above all the primary responsibility of the government.

Governments, local authorities and international institutions should place the urban challenges of the twenty-first century at the top of its priorities.

The year 2016 should represent a turning point. Habitat III is a unique opportunity for governments and institutions around the world to engage in a New Urban Agenda that addresses the challenges of rapid urban growth and offer a new model of urbanization.

The public opinion should be sensitized about both the problems of the cities and the potential that these same cities have in generating livability, welfare and equity. The urban problem concerns each inhabitant of the earth.Citizens, as a political community, should claim loudly their right to the city.

It is in the city where housing rights, life, health, equality, water, freedom of conscience or education, like many others are exercised. The right to the city is not like any other right. It is a right based on which all other human rights are developed, and will become more so in a future urban planet.

Allow me to conclude by assuring you of my personal support and that of the United Nations as a whole for a successful outcome in Habitat III. 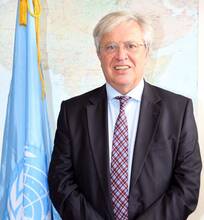