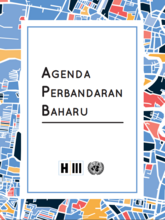 nua-bahasa-malaysia.pdf
Abstract
Adopted in 2016 in Habitat III, the United Nations Conference on Housing and Sustainable Urban Development, the New Urban Agenda is an action-oriented document which sets global standards of achievement in sustainable urban development, by readdressing the way cities and human settlements are planned, designed, financed, developed, governed, and managed, through cooperation with committed partners, relevant stakeholders, and urban actors at all levels of government as well as the private sector and in supporting the implementation of the 2030 Agenda.
Publication Year
2018
Country
Malaysia
We’re rebuilding! If you can’t find what you’re looking for, please check the old website.