He said Egypt had already adopted a national programme for urban development that called for building new green and smart cities while improving the infrastructure of existing cities.

Setting the tone for the ceremony, UN Secretary-General António Guterres reminded the audience that this year’s theme -- Adapting Cities for Climate Resilience – should prompt cities around the world to become more resilient to survive the ongoing climate-related crises around the world.

“Cities are hubs of innovation and human ingenuity — and potential centres for transformative action to implement the Sustainable Development Goals and build a zero-carbon, climate-resilient and socially just world,” said the Secretary-General in a message delivered by the UN Resident Coordinator for Egypt Elena Panova on his behalf. 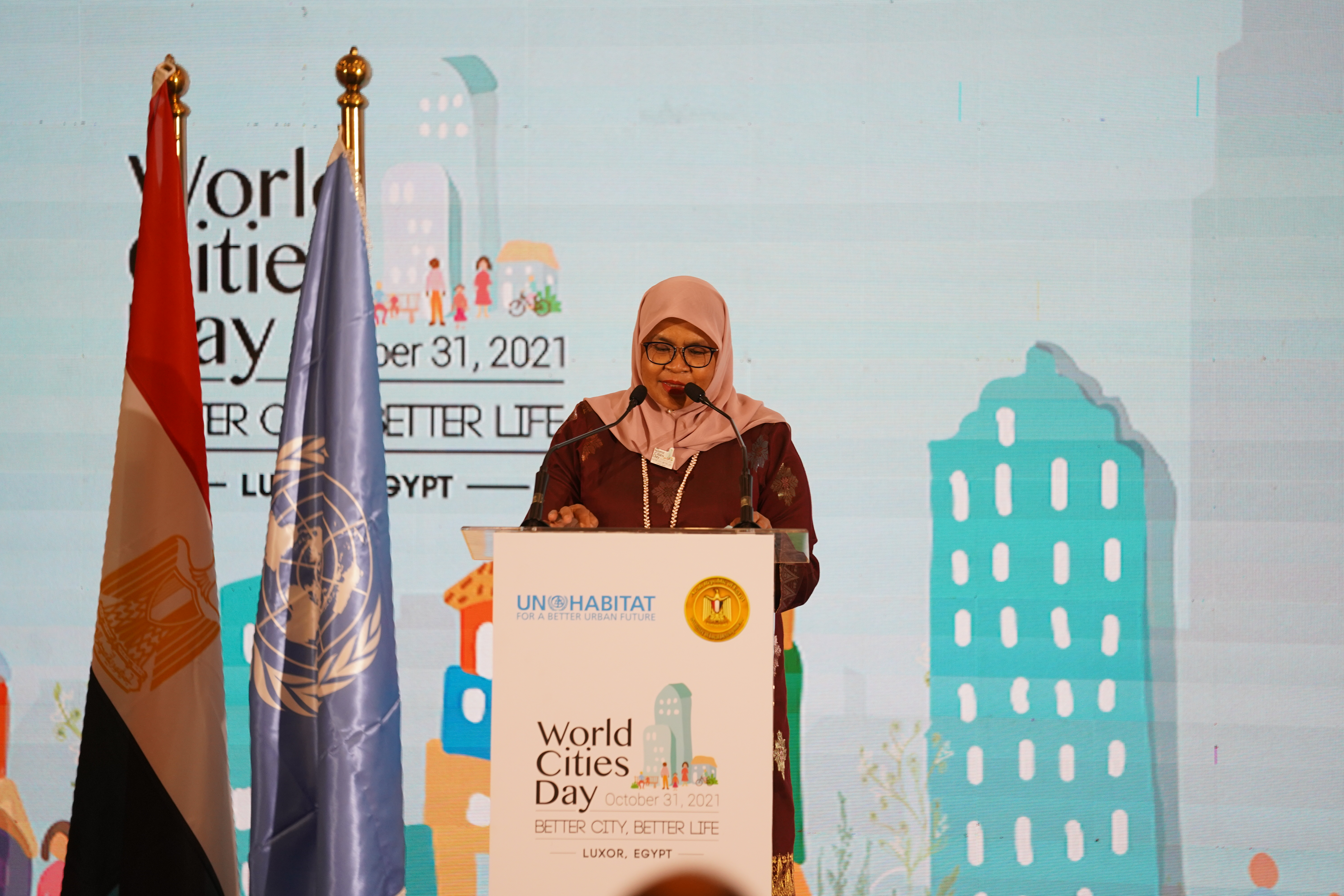 In her remarks, UN-Habitat Executive Director Maimunah Mohd Sharif said while the Luxor event is “a timely reminder of the extraordinary achievements of human civilisation, it is also a reminder of the fragility of our bond with the natural world.”

She added: “I hope to take recommendations from the roundtable sessions to COP26. I hope Member States will also meet their commitments to prepare their declared actions as we proceed from Urban October towards the World Urban Forum in June 2022 in Katowice Poland.”

World Cities Day this year coincided with the opening of the UN Climate Change Conference known as COP26 meeting in Glasgow, Scotland. The chair of the UN Secretary-General’s Youth Advisory Group Nisreen Elsaim spoke from the Conference.

In a statement read on his behalf, the Secretary General of the League of Arab States (LAS) Ahmed Aboul-Gheit said the effective partnership with UN-Habitat in developing regional strategies, plans, and forums allowed the Arab countries to improve the quality of local and sustainable development policies.

The Global Observance also linked up live to the celebrations at Expo2020 in Dubai to hear about the discussions on urban resilience in the region.

The moderator pointed out that World Cities Day is a legacy of Expo 2010 which took place in Shanghai and that China has remained a strong partner ever since.

The Mayor, who was speaking  at the Chinese national observance in Shanghai, announced the launch of the release of the  Shanghai Adapted Index and the 2021 edition of Shanghai Manual which aims to scientifically assess the level of sustainable development of cities around the globe.

In a video, the Director General of the World Health Organization Tedro Adhanom Ghebreyesus called for cities to “reimagine urban environments”.

The President of the UN-Habitat Assembly and Vice Minister for Multilateral Affairs and Human Rights of Mexico Martha Delgado said holding international forums such as WCD 2021 in Luxor allowed for increased multilateral cooperation, adding that her country has already developed nationwide coordination between regions and cities to address the climate change.

Co-chair of UN-Habitat’s Stakeholder Advisory Group Enterprise Siraj Sait of the University of East London said, “UN-Habitat is perhaps the most inclusive among (UN) agencies in co-creating joint implementation of the New Urban Agenda and the SDGs.” He also praised the efforts of Egypt, Spain and 20 other countries who have facilitated National Urban Forums to include diverse stakeholders in urban policy development and implementation.

The opening day speeches were followed by four roundtable discussions on Climate Adaptation for the Most Vulnerable People; Innovate4Cities Conference Outcome; Towards a Resilient and Green Future: COVID-19 Recovery in Partnership; and Climate Change in the Arab Region - Challenges and Opportunities.

The national celebration of World Cities Day in Egypt on Saturday also included three moderated sessions in Luxor on Upper Egypt Local Development Programme; National Programme for the Development of Egyptian Villages; and Youth Dialogue on Healthy Cities and Climate Resilience for their wellbeing.

A national pre-event to World Cities Day was held on Saturday with discussions on national urban challenges and efforts to address them. This was followed by a field trip to the Al-Saida Water Plant for River Bank Filtration, an innovative project which has provided clean water at a fraction of the usual cost to over 2 million people. The day concluded with a celebration of Luxor’s history with a presentation by leading Egyptian archaeologist, Zahi Hawass, and a dinner by the Ministry of Tourism in the ancient Luxor Temple.

Around 50 events were planned for World Cities Day across the world with the day marking the end of Urban October. For more information go to https://urbanoctober.unhabitat.org/.