Ulaanbaatar, Mongolia, 22 November 2021 – While UN-Habitat has declared themes and missions such as Build Back Better, Adapting Cities for Climate Resilience, and encouraging cities to adopt environmentally-sound urban agendas, the UN agency is equally adamant that good policies can only be implemented through participatory processes that involve and have the buy-in of local communities.

The Mongolian capital is an example of how local communities have taken charge of not only the implementation process but also devising side projects that might not even be part of the main programme but still contribute toward the broader goal.

The Ger areas informal settlements, home to one million people and accounting for 68 per cent of the city’s population, were mainly established on low land along the river and slopes of surrounding mountains.

Given such realities, UN-Habitat has implemented the Flood Resilience Building in Ulaanbaatar Ger Areas since 2019, funded by the Adaptation Fund, not only as an adaptation project but also as one to lends ‘voice’ to the priorities of the high-risk communities and vulnerable residents.

By focusing on flooding, the project increases resilience of the Ger areas through construction of physical flood infrastructure and improved sanitation services; improves the knowledge on flood hazard and risk exposure and vulnerability for these areas; and improves the resilience and adaptive capacity of the Ger areas through a community-based gender-responsive approach.

In the long run, the project intends to generate ‘demand’; and supply the software, tools and methodologies necessary to urban authorities for other high risk Ger communities based on incremental impact for replication.

That incremental approach was designed from the inception to be based on engaging representatives of the vulnerable groups in the community and stakeholders where community primary groups are formed, trained, and sustained throughout all stages of the project.

A primary group is defined as a group of persons in a community who want to improve or keep their neighbourhood clean and tidy. Such groups are normally small in number, ranging from 10 to 20.

An example of that engagement process to produce by-products in the Flood Resilience Building in Ulaanbaatar Ger Areas is how a primary group composed of pensioners and housewives have joined hands to form a movement on sorting garbage and making sure gullies are clear. Group members have divided responsibilities in such a way that a member collects a type of waste, for instance plastic waste in his or her plot and another one collects glass waste and so on.

The natural gullies are only drainage facilities for most of the areas in case of rain and flash flooding from the surrounding mountains. Illegal disposal of solid waste into natural gullies by inhabitants is common and creates a substantial risk of flooding in Ger areas. 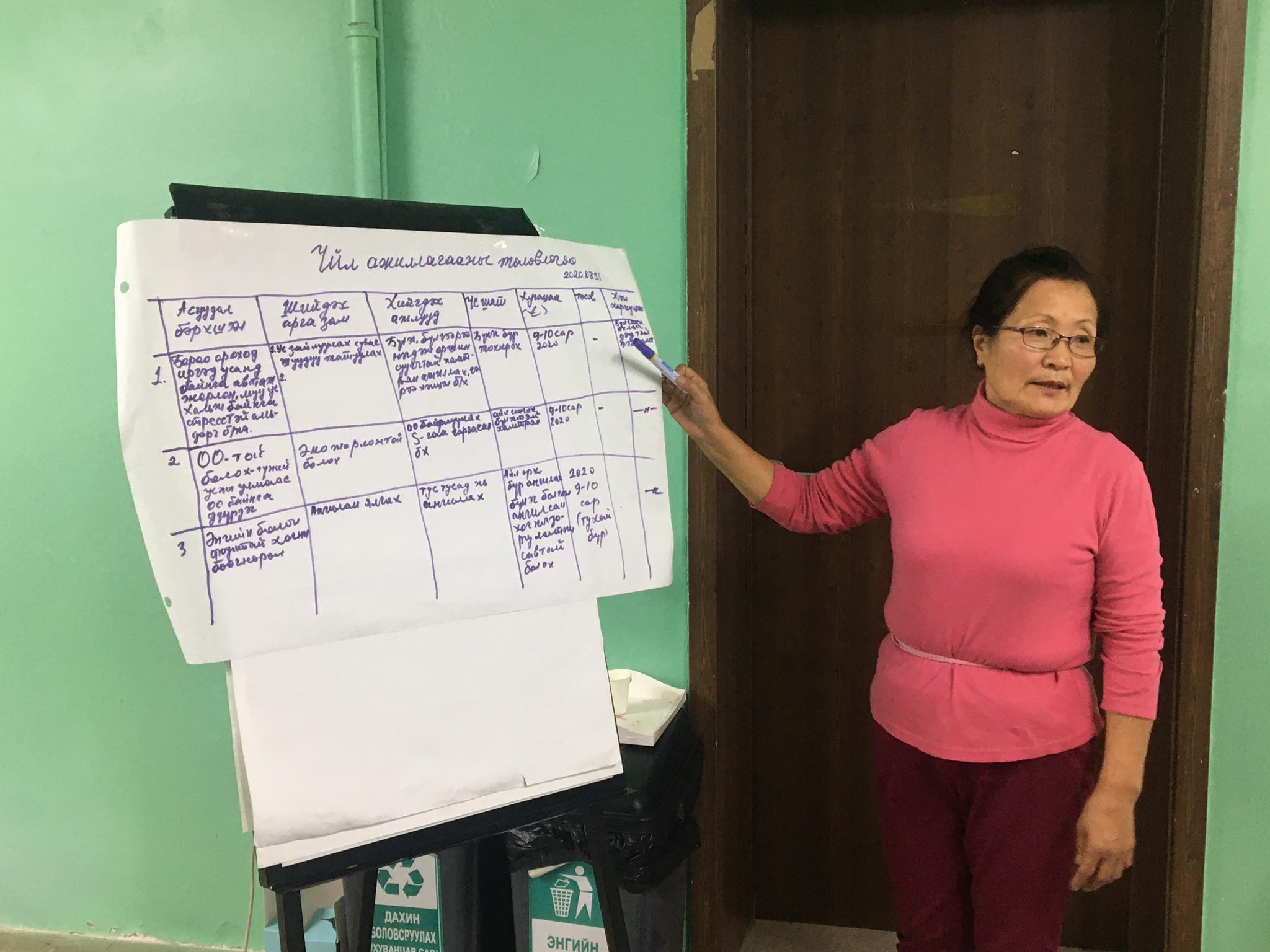 Oyuntsetseg Manaljav, the group leader, says the initiative is expected to help inhabitants to change their habits for waste disposal at first and then make income afterwards from waste recycling. Income from the recycling will be utilized for improvement of garbage sorting and further management.

“We, communities should already start contributing the flood risk reduction by at least changing our way of garbage disposal to waste sorting and recycling,” she says.

Enkhtsetseg Shagdarsuren, National Project Manager of UN-Habitat Mongolia, said, “We are very happy about the current impacts of the project as the communities organized and trained under the project have already started working themselves for flood resilience building and climate change adaptation based on their own resources which can be a good example for other area people.”