The mandate of the EUTF Project Steering Committee is to provide guidance on the implementation of the programme in regards to the strategic and technical matters of the execution of actions. The Committee's aim is to assess progress against the strategic objectives and guide the implementing partners in the execution of the programme. The main objective of this Steering Committee Meeting was to provide current updates on the refugee context of Kenya, and to present on programmatic achievements, challenges and next steps.

The meeting started with introductory speeches from key representatives, including from Lukas Katee Mwanza, Commissioner of the Department of Refugee Services (DRS), emphasising on the country’s inclusion of refugees through the Kenya 2021 Refugee Act, stating "We support the review of those priorities to support refugees through Settlements, (such as through) the development of the Marshall Plan and comprehensive policies for refugees. We are currently putting in place regulations to operationalize the Act".

Mwanza continued by giving an assurance of the government's continued commitment to continue supporting refugees, and expressed appreciation of the partnership and collaboration with all organizations stating “We appreciate the experience and expertise from our partners who have been working with refugees”.

Abdullahi Daud Mohamed, Director of Health for Garissa County, brought attention to the need for spatial planning in Kenya’s humanitarian operations by stating, "The prioritization of health, socio-economic development, and creation of Spatial Plans needs to occur to facilitate increased integration between host and refugees. A good spatial plan for the camp and county is needed."

During the meeting, UN-Habitat, represented by Senior Programme Officer, Ivana Unluova, provided details on programme achievements in Kakuma-Kalobeyei and Dadaab in regard to the spatial profiling, visioning and preparation of regeneration strategies for these key refugee settlements. UN-Habitat explained that the visioning and regeneration of Kakuma-Kalobeyei and Dadaab will identify short, medium and long term interventions to transform these camps into viable settlements serving both host and refugee communities into the future.

UN-Habitat also mentioned the recently signed MoU between Turkana County Government and UN-Habitat in support of the ongoing urbanisation of the County, “The future is all open for more collaboration and more participation of UN-Habitat in conjunction with other partners”. Abdullahi Daud Mohamed, Director of Health, Garissa County,  had also expressed a strong interest for an MoU between UN-Habitat and Garissa County moving forward to support these processes.

The Terms of References of the Steering Committee were adopted and the session was concluded by UNHCR, discussing some of the upcoming and ongoing challenges of work under the EUTF programme, however ensuring that all project activities would be  implemented within the project timeframes and their commitment to engaging the new County Governors collectively. 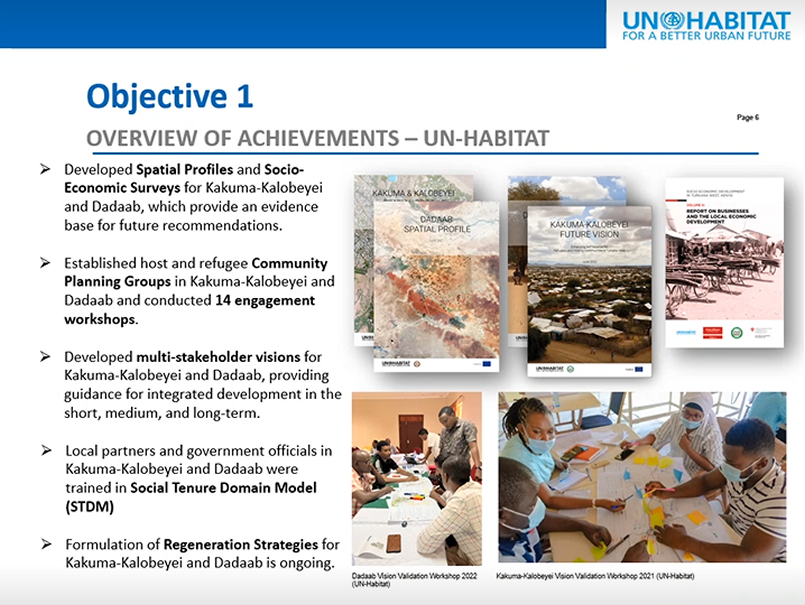 UN-Habitat’s achievements under the EUTF programme.