The position of the new Unity Government is that cities are key economic drivers for development and improving living conditions and service delivery to meet the needs of the poorest and most vulnerable. Service delivery will promote social cohesion and establish trust in public institutions. If the Government and the international community are unable to meet basic need of the vulnerable, and to reintegrate the demobilized combatants, many of those will be compelled to find their own means of survival by engaging in illicit activities such as drugs or are attracted to join the insurgents to obtain incomes.

In response, UN-Habitat will address the urgent needs of the most vulnerable households such as recently demobilized combatants, IDPs, rural-urban migrants, returnees and low-income urban households, through the establishment of Community Development Councils to upgrade underserviced areas. In five cities, Kabul, Kandahar, Herat, Mazar-e-Sharif and Jalalabad, the Programme supports to secure and stabilize urban areas across five cities by responding to the urgent needs of recently displaced people, demobilized combatants, and returnees through community empowerment, enhancing their access to basic services, and improving their livelihoods thereby enabling them to live in dignity.

UN-Habitat will work closely with the Afghan Government such as Independent Directorate of Local Governance and municipalities. In total, approximately 236,000 people will benefit from this Programme.

“Humanitarian support to IDPs in the Republic of Iraq including the Kurdistan Region of Iraq through provision of durable shelter (Baghdad, Dohuk and Kerballa)”

The severe humanitarian crisis encountered in Iraq is characterized with more than 2 million internally displaced people added to the previous post 2006 caseload of IDPs (1.1 million) and the 250,000 Syrian refugees, the situation which is exacerbated in 2014 by prevailing violence and ongoing war in 5 governorates against the terrorists group that calls itself Islamic State. After 2003, UN-Habitat/Iraq was largely engaged on early recovery efforts and particularly on IDPs stabilization through shelter support and reconstruction efforts. During 2004 to 2008 Japan had funded four projects with total cost of USD 42 million for the reconstruction of Iraq implemented by UN-Habitat covering settlements, community infrastructure, schools and other public facilities in 8 cities.

Following the deterioration of the humanitarian situation in early 2014 UN-Habitat has been engaged on emergency support to Syrian refugees and Iraqi IDPs through several projects in Iraq including the establishment of three IDPs prefa shelter sites in Erbil, Dohuk and Sulaimanieh. The current Japanese funded project, aims to develop infrastructure and public facilities including 1,700 temporary prefabricated shelter units in three shelter sites located in Baghdad (500 units), Dohuk (800 units) and Karbela (400 units). Prefab shelter solutions are considered as dignified and durable as well as suitable for fast installation and protection from harsh weather conditions. Additionally, due to the protracted nature of this displacement crisis, the adopted prefab shelter solution is more economically feasible for the medium and long term sheltering. UN-Habitat with the three governorates have carried out the site selection, and initiated the preparation and planning activities including staff mobilization to establish the three IDPs prefab shelter sites. The prefab units should be distributed according to vulnerability selection criteria agreed with the emergency protection cluster. The development of the sites consider installation of basic infrastructure, roads, electricity, water supply system, sanitation facilities schools and clinics.

Intense armed encounters in FATA, Pakistan, took place over the last decade, with temporary displacements and returns occurring in parallel in different agencies of FATA, in the vicinity of the border with Afghanistan. Towards the end of March 2013, approximately 84,000 people fled from Tirrah Valley, Khyber Agency, due to an escalation in fighting between armed and non-state actors. On 15 June 2014, the Government announced another full-scale military operation, this time in North Waziristan Agency (NWA), which again resulted in the temporary displacement of a much larger number of people – close to 1 million were registered. The internally displaced households sought refuge in the neighboring districts of Bannu, Lakki Marwat, Karak, Dera Ismail Khan and Kohat. The living conditions are very challenging, especially in terms of access to shelter, water, sanitation, hygiene, food and health provisions. Meanwhile, for those who had fled Tirrah in 2013, returns have been organised by the government, but the humanitarian challenges are significant.

In December 2013, UN-Habitat and partners, upon request of the FATA Government, published a “Rapid technical Assessment of Damage and Needs for Housing Reconstruction in Tirrah Valley”, showing the challenges to repair shelters in the places of origin. In addition to the 2014 Strategic Response Plan (SRP), a Preliminary Response Plan (PRP) for North Waziristan was also launched by the Pakistan Humanitarian Country Team, for a case load of 500,000 internally displaced people (IDPs). The PRP was published in July 2014.

To contribute to return and to alleviate the displacement crisis, the Government of Japan confirmed a donation of US$ 4.03 million to the United Nations Human Settlements Programme (UN-Habitat) for the provision of Shelter and Water, Sanitation & Hygiene (WASH) assistance to households displaced from North Waziristan Agency  and others returning to Tirrah Valley, Khyber Agency. For those displaced from North Waziristan, 1,800 vulnerable households will receive shelter assistance and will be given training on shelter construction techniques and 3,846 vulnerable households will be provided access to safe water, improved sanitation and support towards better environmental hygiene conditions. Appropriate shelter and WASH assistance will be given to 1,800 vulnerable households who have returned to Tirrah Valley.

In Sri Lanka, three decades of conflict ended in May 2009, displacing over 450,000 people. The prolonged conflict significantly impacted the lives of the people in the North and East of Sri Lanka. The damage to housing and community infrastructure in the conflict affected districts, including school buildings, has negatively affected the living conditions of the resettled people and their children’s education. Many children in the northern Mannar district are still learning in a poor environment, attending classes under trees or in temporary buildings. The lack of sanitation facilities is also a serious issue, negatively impacting on children’s health.

Continuing its’ support for Sri Lanka’s post-conflict reconstruction efforts, the Government of Japan will be providing an additional USD 4.2 million in March 2015 to improve the learning environment in Mannar district. This new project will address the needs of 15 schools, including construction of primary and secondary school buildings, water, sanitation and hygiene (WASH) facilities for school children and teachers’ quarters. It will benefit over 10,000 returnees including 5,500 school children.

Commencing on 1st April 2015 and continuing for 30 months, the project will be implemented by UN-Habitat in partnership with community based organizations, Parents and Teachers Associations, and Government officials.

Communities in Myanmar have been undergoing a series of socio economic setbacks due to conflicts, repeated natural disasters and extreme weather conditions. Over half a million people have been displaced due to conflict alone as of September 2014. In Kachin State nearly 100,000 people currently remain displaced from their homes and are accommodated in over 150 different locations and host communities; over 50 per cent are housed in camps located in areas beyond government control.

The Commercial capital, Yangon which homes to 5.8 million people, suffers from a multitude of natural hazards such as floods, cyclones and storm surge, fire, and earthquakes that have adversely affected a

large number of poor and vulnerable communities. It is also observed that 34.5 percent of the houses are semi-permanent and 3.4% houses are with temporary structures. There are approximately 40,000 households living in squatter conditions which housing represents the worst. People living in these houses are frequently affected by floods exposing specially children into health hazards.

With the contribution of the Government of Japan,   actions are framed within the overall objective of helping Myanmar’s poor and vulnerable communities affected by conflicts and natural disasters to address the emergency needs to restore their normal life and to sustainably improve quality of life. The project’s specific objective of assisting women and children is to respond to unexpected disaster conditions through all project activities to be implemented, promoting active participation of women, immediate recovery of their economic and social actions and providing safer and healthy environment for children.

The project aims to benefit approximately 65,000 people, supporting vulnerable communities living in poor housing conditions in disaster prone areas of Yangon to rebuild their dilapidated houses where safety and living conditions of mainly women and children are improved with better housing conditions. Furthermore project will help conflict affected communities in Kachin state supporting them to reconstruct community infrastructure to enhance the social and economic connectivity.  Project is implemented through ‘people’s process’ where opportunities are created for communities to take the lead role in planning and implementation of housing and community infrastructure improvement while contributing to the local economy. This will contribute to the poorest households to start up sustainable livelihood by injecting cash into local communities and capacity building will impact in the process of community development as well in ensuring that communities will fully engage with future improvement activities for their communities.

The conflict that began in December 2013 in South Sudan continues to affect the lives of millions of people. It has been marked by brutal violence against civilians and deepening suffering across the country. Insecurity and active hostilities constrain civilians’ freedom of movement. The major humanitarian consequences are widespread displacement due to the violence; high rates of death, disease, and injuries, severe food insecurity and disrupted livelihoods, and a major malnutrition crisis.

South Sudan was already fragile before the current crisis, and all parts of the country continue to be affected by food insecurity, disease outbreaks, malnutrition and other threats to lives, livelihoods and well-being.

The people in need for the coming year include an anticipated 1.95 million internally displaced people and a projected 293,000 refugees. In addition, around 270,000 more people will likely have sought refuge in neighboring countries by the end of 2015, including those who left in 2014.

At the end of 2014 UN-Habitat finished implementation of a Government of Japan funded project implemented in Northern Bahr el Ghazal, Western Bahr el Ghazal and Central Equatoria States in period 2013-2014. Through that project UN-Habitat has supported returnee families in 5 locations in these two

states. The support included provision of 600 basic houses and minimum urban services as well as re-establishing livelihoods of selected families in places of their final return. 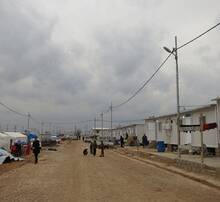 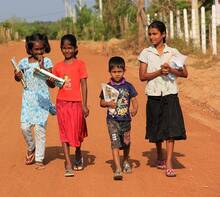 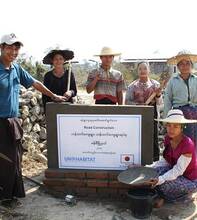 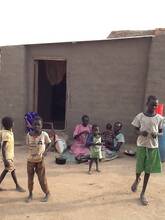