Medellín, 11 April 2014: This year’s World Urban Forum has resulted in the creation of a new alliance between nine of the world’s largest UN and non-UN organizations joining forces to build urban resilience and to strengthen the social, economic and environmental fabric of the world’s urban spaces. The Medellín Collaboration on Urban Resilience, announced at the 7th World Urban Forum in Medellín, Colombia, includes the UN Human Settlements Programme (UN-Habitat); the UN Office for Disaster Risk Reduction (UNISDR); The World Bank Group; the Global Facility for Disaster Reduction and Recovery (GFDRR); the Inter-American Development Bank (IDB); the Rockefeller Foundation; 100 Resilient Cities - Pioneered by the Rockefeller Foundation; the C40 Cities Climate Leadership Group; and ICLEI - Local Governments for Sustainability .

Collectively, these organizations work in over 2,000 cities globally, with more than $2 billion of existing funds committed annually toward advancing resilient and sustainable urban growth and development. The collaboration is based on the challenges cities face in promoting sustainable urbanization, in particular the increasing urban exposure to various shocks and stresses. There are nearly 180,000 people added to the urban population each day. By 2030 there will be nearly 5 billion urban dwellers, representing 60 per cent of the world population. There are also some 1 billion people living in informal settlements without adequate access to critical basic services, such as healthcare, clean water and sanitation, and in locations exposed to hurricanes, cyclones, flooding, earthquakes, epidemics, as well as crime, and other man-made threats, including serious risks from catastrophic climate change.   The aim of the collaboration is to facilitate the flow of knowledge and financial resources necessary to help cities become more resilient to disruptions related to climate change, disasters caused by natural hazards, and other systemic shocks and stresses, including the socio-economic challenges associated with rapid urbanization.   The primary objectives of the collaboration are:

"It is with pleasure I welcome the formation of this collaboration,” said UN-Habitat Executive Director, Dr Joan Clos. “Each of the institutions in this group brings both unique and shared expertise. Individually, we have accomplished much; together, we offer far more through our collective support to local governments in building resilience in all cities in the world."   The UN Special Representative for Disaster Risk Reduction, Margareta Wahlström, said: “There has been a tremendous outpouring of support for urban resilience in recent years. This new collaboration represents a consolidation of those efforts as we prepare for an explosion of urbanization in the 21st century, when more urban space will be created than at any time in history. Over half the world’s population now lives in urban areas and this will grow dramatically in the coming generation. We must prepare for it.”   "The World Bank commits over $2 billion a year to support urban resilience in developing countries," said Sameh Wahba, Acting Director of the World Bank's Urban Development and Resilience Department. "This collaboration across organizations is a significant step towards facilitating the flow of additional financing to cities and ultimately ensuring that shocks to the urban system don't undermine decades of economic growth and prosperity."   “The IDB is proud to be part of such an important partnership with these global institutions in the sector,” said Vicente Fretes Cibils, Chief of Fiscal and Municipal Management Division at the IDB. “The IDB’s Urban Development and Housing strategy aims to promote environmental conservation, the management of urban natural resources, and adaptation to climate change. Our main objective is to make cities more resilient with interventions that have a positive impact on the largest number of poor households.”   “Building resilience is a priority for cities everywhere so that they are prepared for the shocks and stresses we know they will face,” said Dr. Judith Rodin, President of The Rockefeller Foundation. “Over the past decade The Rockefeller Foundation has worked globally to support cities as they build their resilience, and we are seeing incredible momentum, further evidenced by the joint commitment being made today.”   "In an endeavor as important as helping cities build resilience, the greater number of partners, the better," said Michael Berkowitz, President of 100 Resilient Cities - Pioneered by The Rockefeller Foundation.  "This collaboration will ensure that cities have access to the most powerful financial and technical tools to deal with shocks and stresses, and is directly in line with our goal of having best practices shared across the globe."   "For the developing world, this will be the century of urbanization,” said Francis Ghesquiere, Head, GFDRR Secretariat. “This creates huge opportunities, but also many challenges, including the concentration of vulnerable populations and the risk of major disasters. Through the “Medellin Collaboration on Urban Resilience” we and other partners are committing to provide cities with the support they need to improve urban planning, investment, and become more resilient." "As the Chair of C40 Cities Climate Leadership Group I believe that climate resilience is a critical issue,” said Eduardo Paes, Mayor of Rio De Janeiro and the Chair of C40 Cities Climate Leadership Group.  “C40 is committed to helping cities increase their climate resiliency through effective climate change adaptation and mitigation actions. We are pleased to be participating in this collaboration, which will improve alignment amongst approaches to city resilience, maximizing the impact of resources and allowing sharing of successes.”   “The global initiative announced in Medellin is fully in line with ICLEI´s  ‘Resilient City Agenda’ which aims to support cities to reduce their vulnerability by building on their capacity to respond to climate change challenges, disasters and economic shocks,” said Gino Van Begin, Secretary-General of ICLEI – Local Governments for Sustainability. Commenting on the collaboration, Deputy Mayor of Barcelona, Antonio Vives, said, "It is great news that the global alliance to make all the cities around the world more resilient grows. The resilient city model that Barcelona represents serves as an example in many other cities of what best practices are in urban development, sustainable urban planning and in the management of shocks and stresses. Being prepared for facing crises in our infrastructures and in our urban services has both social and economic benefits.”   The collaboration will mobilize support for the post-2015 urban resilience agenda, including the Sustainable Development Goals, a new universal climate change framework, a new global agreement on disaster risk reduction to succeed the Hyogo Framework for Action, and the Habitat III agenda.   The full text of the collaboration will be made available at www.unhabitat.org. 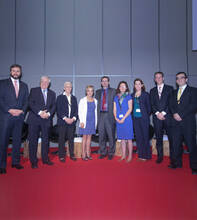