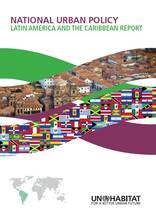 Given the intensity of the urbanization process and of its challenges in the region, understanding how urban policies have attempted to address them is of particular interest. This report aims to provide an overview and an assessment of the state of national urban policies in the Latin America and the Caribbean region, providing a comparative analysis
of policy processes and mechanisms put in place, highlighting best practices but also obstacles to achieving sustainable urban development.

Drawn from the observed “new generation of national urban policies”, the concept of National Urban Policy (NUP) is defined by UN-Habitat as “a coherent set of decisions derived through a deliberate government-led process of coordination and rallying various actors for a common vision and goal that will promote more transformative, productive, inclusive and resilient urban development for the long term” (UN-Habitat, 2014). It has been recognized as a primary governmental tool to coordinate sustainable development agendas such as Agenda 2030 and the New Urban Agenda, and specific national urban development paths.

The report is part of a series of five regional reports assessing the state of national urban policies that complement the Global State of National Urban Policies Report, conducted in collaboration between UNHabitat and the OECD. These studies are timely, as they follow up on Habitat III and Agenda 2030 for Sustainable Development, and accompany the Second International Conference on National Urban Policy, held in Paris, France in May 2017.