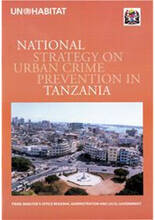 In 2007 Tanzania committed to the development of a national strategy on urban crime prevention. The National Strategy on Urban Crime Prevention in Tanzania is the culmination of 10 years of work on safety in Tanzania. Through this strategy the Government of Tanzania is concretely responding to the concerns expressed by its people, especially in urban areas, to the negative effects of crime and violence. People living in urban areas in Tanzania are more concerned with the issue of crime and violence than those living in rural areas.

Half the population living in urban centres in Tanzania feel that crime and violence has increased over the past three years, compared to only 28% in rural areas. There is an increasing proliferation of drugs, alcohol and small arms in urban centres. Persistent unemployment, ethnic, racial and religious conflicts, domestic violence, violence against women and abuse and neglect of children continue to threaten certain communities and maintain a culture of violence. Theft of personal property and home burglaries are the most common crimes overall. Less than half the crimes that were surveyed were reported to the police.

One of the most common reasons for not reporting to the police was that they were unavailable or inaccessible. Many victims also stated that the crime was not important enough to warrant reporting to the authorities. Nearly two-thirds of the victims reported the crime to a structure other than the police: mostly traditional authorities, local ward councilors and the sungusungu. These phenomenons have led over 70% of the population to change their behaviour due to feelings of insecurity.