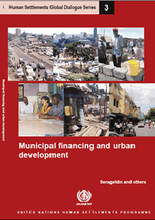 Municipal Finance of Urban Development was prepared as a background paper for the UN-Habitat Global Report 2005. Financing Urban Shelter and a summary was included as Chapter 3 of the Global Report under the title, Municipal Finance: Conditions and Trends. It addresses the wide range of problems that face municipal authorities in financing urban development as they respond to the challenges of major shifts in their economic base resulting from falling trade barriers and a globalizing economy.

(2) Meet the demands for public services.

(3) Expand and diversify the local tax base.

Municipalities are but one actor in the financing of urban development, but in many ways they are the pivotal one because of their statutory powers and their ability to act on all sectors in a defined geographic space. Households and private enterprises are the developers and builders of urban communities and the owners and operators of economic activities. But unless the municipality can deliver to them the support infrastructure and services they need, orderly development will be impaired.

In emerging economies, the rapid pace of urbanization and large migratory flows have increased the pressure on local government spending for urban development. In most of these countries decentralization laws were enacted in the decade of the 80's and 90's amid fiscal deficits, financial crisis and political unrest, eroding local revenue and disrupting access to funds for capital investment.