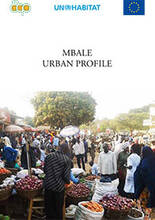 Mbale is a Municipality in Mbale District in the eastern part of Uganda. It began as a commercial centre for Arab slave traders and later attracted Indian traders who had come to East Africa to build the railway line. Eventually, Mbale became the Uganda Government’s administrative centre for the Eastern Uganda region.

Mbale Town is located on the foot of Wanale ridge of Mt. Elgon which is 8,000 feet above sea level. It covers a geographical area of 2,435 hectares. Mbale’s central location makes it attractive, competitive and a business hub in the region. Further its location and multiple entry points and its close proximity to Kenya makes it accessible to all regions and provides opportunities for enhanced trade activities that attract local investment necessary for economic development. Mbale town is experiencing typical problems associated with urban areas such as high population growth and unemployment, lack of basic urban services and inadequate waste management.