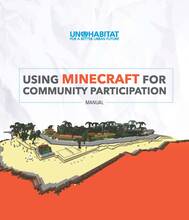 Minecraft is a ‘sandbox’ computer game originally launched in 2011. The game has sold nearly 100 million copies worldwide, making it one of the world’s best-selling computer games. UN-Habitat has been working with Mojang, the makers of Minecraft, since 2012 on an innovative programme called Block by Block.

Through Block by Block, UN-Habitat uses Minecraft as a community participation tool in the design of urban public spaces. UN-Habitat's experiences of impementing these projects all over the world shows that Minecraft is a good way of involving hard to reach groups such as youth, women and slum dwellers in urban design processes. Read this manual to find out how it's done.