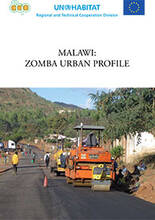 Under the motto of “Floriate Zomba” (Make Zomba a Flowery City) Zomba City, the first capital of Malawi up to 1975, is undergoing rejuvenation since it was declared a city in March 2008. The city is experiencing rapid population growth with a population of 88,314 in 2008 and an annual growth rate of 3 percent.

Some 51 percent of the city’s population is male and 49 percent is female. The city has a population density of 2,264 per km². The local economy of Zomba comprises of trade and distribution, community and social services, agriculture, and some light industries. Poverty stands at 29 percent and over 60 percent of the population lives in informal settlements.

Comprehensive urban management and development of land use and local economic development plans will help in positively addressing various challenges being faced. The city council needs to foster public-private partnerships (PPP) in order to maximize the potential in urban development and poverty alleviation and improve its capacity in terms of physical economic infrastructure and environmental planning.