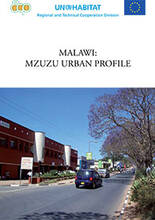 Mzuzu City, with a population of 133,968 and growing at 4.2 percent per annum, is one of the fastest growing cities in Malawi and is the third largest urban centre after Lilongwe and Blantyre. It is the hub of government administration, business, industry, commerce, and services for the northern region of Malawi, and it serves a hinterland with a population of 1,708,930.

Originating from a Tung Oil Estate in 1947, the city has grown from 23km² to 143.8 km² in 2008 and was declared a city in 1985.However, the city lacks adequate infrastructure and services. Over 60 percent of the population lives in unplanned settlements.

The city does not have adequate policies and regulations to support orderly and planned growth.Improvement and expansion of service delivery, proper urban planning and good financial management are crucial for the development of the city.