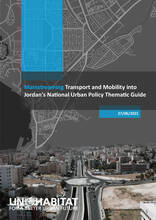 Transport is widely recognized as a prerequisite for sound economic development, as it drives competitiveness, growth, and job creation. It provides access and mobility to employment and education, allows for the import and export of goods, and connects the resource base with the demand base. Therefore, there is a necessity to integrate transport and mobility planning into urban planning to allow for more inclusive, compact, and livable cities for all communities.

In Jordan, transport is considered a key enabler and driver for the Jordanian economy and represents one of its most important competitive factors. However, the transport sector in Jordan, specifically the urban transport system, has been worsening due to the increased demand for travel resulting from several factors, including an outburst in population, the massive and sudden influx of Syrian refugees, and the concentration of population in major urban areas. All of this is exacerbated by the car-dominant culture in the country, which has led to an exhausted sector and, consequently, unsustainable mobility patterns in the country.

In an attempt to tackle some of these challenges, the Government of Jordan (GoJ) is currently constructing two Bus Rapid Transit (BRT) projects. These systems are expected to be the building blocks for an improved and enhanced public transport system in the country and, consequently, drivers for more sustainable mobility patterns. However, those projects / initiatives alone are not enough, as it is necessary that more is done to move towards a more sustainable and resilient transport sector.

Recognizing the criticality of the transport and mobility sector and its interdependencies with urban planning and policies in Jordan, this thematic guide has been developed to mainstream urban mobility and transportation into the JNUP.