UN-Habitat is the shelter co-lead and plays an integral role in Lebanon’s crisis response plan which has been created in response to the Syrian crisis and in effect since 2011. The LCRP is formulated by the United Nations agencies and all the international NGO’s working in Lebanon (such as OXFAM, NRC, DRC, ICRC, World Vision, ACTED, CARE among others) and the government. This response plan functions as a programme under the Prime Minister’s Office and is also lead by the Ministry of Social Affairs. From the humanitarian side it is led by the UN Resident Coordinator’s office. It aims at streamlining the institutional response and follows a sectorial approach covering shelter, protection, food security, basic assistance, education, health, WASH, livelihoods and social cohesion.

Since 2013, UN-Habitat Lebanon built on its experience in capacity building for municipalities towards efficient local authorities and reliable partners and launched the “Enhancing the Role of Unions of Municipalities to Respond to Refugees’ & Host Communities’ Needs” project. The aim of the project is to support the accommodation process of refugee families through the active involvement of municipalities and unions of municipalities in identifying, assessing and facilitating sound shelter facilities that comply with UNHCR standards and norms. Furthermore, the project supported host communities through the implementation of sound projects that would respond to community groups needs and would enhance the delivery of basic urban services taking into account the existing and forthcoming numbers of refugees.

Through the project UN-Habitat launched two Regional Technical Offices (RTOs) in 2 Unions of Municipalities (UoMs) in Sahel Zahrani and Iqleem al-Kharoub. The RTOs currently play a major role in assisting and contributing to local planning and implementing various project activities to facilitate and enhance the response to the Syrian crisis in various sectors of shelter, infrastructure and services. UN-Habitat contributed through financial and technical support in addition to continuous coordination of project activities. This has increased the capacity of local authorities and contributes to the flow of investment into urban basic services.

The Regional Technical Offices are responsible for: 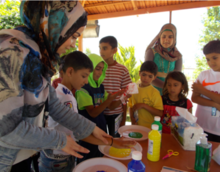