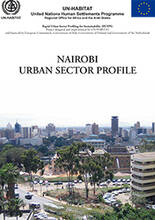 Informal settlements cover only 5% of the total residential land area of the city, but they are inhabited by at least half of the city’s population.