The second and third decades of the 21st century will see an irreversible and historically unprecedented phenomenon. Half of the world’s population currently lives in cities, and this will grow to 60% by 2030 and 70% by 2050. The number of cities with more than 1 million inhabitants has swelled to over 450, more than 20 of which are ‘mega-cities,’ with a population of more than 10 million.

One of the major challenges faced by cities today is the growing number of urban dwellers living in impoverished informal settlements commonly known as slums. About one-third of the global urban population lives in these conditions. The unexpected consequences of this unsustainable model include the increasing cost of living in cities, unemployment, high energy consumption, and negative environmental impacts. 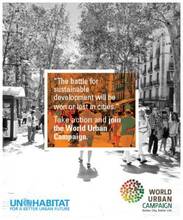