Yaoundé, Cameroon, 4 October 2021 – This year’s celebration of the Global Observance of World Habitat Day brought together ministers from various countries, mayors, heads of UN agencies, a Nobel Prize winner, an international footballer and representatives of the African Union and local government networks.

Over 1,200 people attended the meeting both at the Town Hall in Yaounde, or through live streaming or Zoom.

In her opening remarks, Cameroon’s Minister of Housing and Urban Development, Celestine Ketcha Courtès, speaking on behalf of the Prime Minister, expressed her country’s appreciation for having been chosen to host the celebrations.

She also focused on the theme of this year’s World Habitat Day – Accelerating urban action for a carbon free future  - and pointed out that: “Every country in the world is witnessing the negative impacts of climate change.”

In his message, read by UN-Habitats Executive Director, United Nations Secretary-General Antonio Guterres  said that cities and towns across the globe are facing – and fighting – the dual crises of COVID-19 and climate change,”

“By mid-century, over 1.6 billion urban residents may have to survive through average summertime highs of 35 degrees Celsius,” he added. 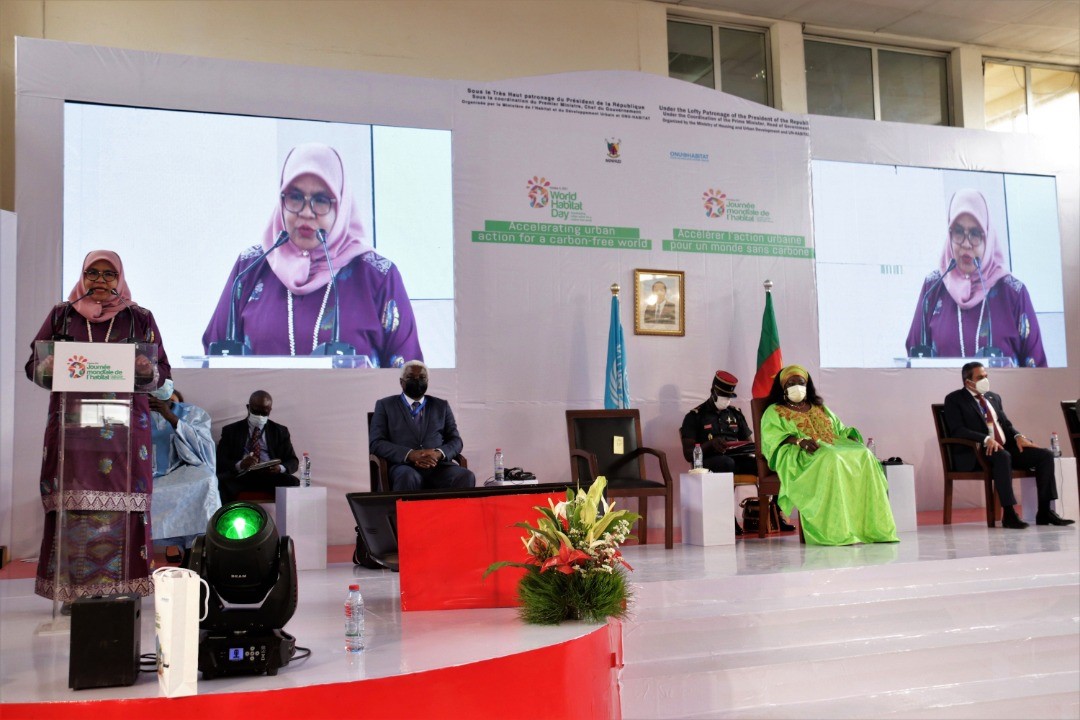 “This World Habitat Day we are calling for urgent action for all of us to double our efforts towards a carbon-free world. We are already seeing the drastic impact of global warming on changing weather patterns. These changes have led to increased flooding and severe heat waves, threatening lives, property and ecosystems,” she said.

In a video message, the first lady of Turkey H.E. Emine Erdogan, who recently received the Waste Wise Cities Global Champion award from UN-Habitat, called for a global plan to deal with the climate crisis and warned that tomorrow could be too late.

Reinforcing the same message, the Executive Director of the UN Environment Programme, Inger Andersen, pointed to the direct link between urbanization, the impact on nature, and climate change.

“Unsustainable consumption and production in cities spreads its impact into nature which sends the impacts back with interest. Even an optimistic target of limiting global warming to 1.5 degrees increase in global temperatures could cause global shifts that leaves cities facing the challenges of sea-level rise and increase in tropical cyclones and heatwaves, and that puts people and infrastructures at risk,” she said during her live virtual intervention.

Youth climate activist Leah Namugerwa said, “to sustain a better, just and more sustainable future we must come together for the planet and through grassroots advocacy, create the change we need to see.”

For his part, Nobel Laureate Mohammed Yunus and founder of the Yunus Environment Hub warned that there were some signs of progress but not enough.

“When we talk about global warming, I tried to give an image of a burning house.  I said we are living in a burning house, all the people in the world living in our burning house,” he said in his video message. “We are having celebrations, we are having parties, enjoyment of our economic successes, high growth rates, prosperities, even technological achievements.”

“(But) we are not seeing what is happening outside the house, the house itself is burning and very soon everything that we are doing inside will be totally meaningless,” he warned.

International footballer UN-Habitat’s Regional Goodwill Ambassador for Africa, Blaise Matuidi spoke about his work for the most vulnerable in Africa. The meeting also heard from Emilia Saiz the Secretary General of the United Cities and Local Government (UCLG) network who emphasized the importance of working together and Issaka Garba from the African Union’s Department of Political Affairs, Peace and Security.

There was a preview of an upcoming joint Report from UN-Habitat and UN Environment Programme on Inspiring Action on Walking and cycling in Africa. In addition, Various prizes were also awarded by the Cameroon authorities including for the cleanest city. The audience  was invited to the eleventh World Urban Forum, the world’s premier global conference on cities,  in Katowice Poland in June next year by Poland’s Secretary of State, Ministry of Funds and Regional Policy, Małgorzata Jarosińska-Jedynak.