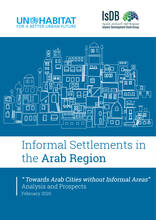 Slums versus informal settlements: the term 'slum' is a "general context to describe a wide range of low-income settlements and/or poor human living conditions". Different criteria are used to define slums include physical, spatial, social and behavioral criterion. Informal or spontaneous settlements are settlements whereby persons, or squatters, assert land rights or occupy for exploitation of land which is not registered in their names, or government land, or land legally owned by other individuals. Squatters are people who occupy land or buildings without the explicit permission of the owner. The structures and location of the informal settlements of the region are characterized by two different patterns: substandard or makeshift structures in central slums, hazardous, and unsafe locations or suburban areas lacking access to basic services; and unplanned urban expansion mostly through the subdivision of agricultural land in violation of existing codes.

At this stage of the analysis, the data collection process was limited. It is based on two elements:

This report provides an overview of the status of informal settlements in the main Arab countries where data was accessible; explores the reasons of emergence, national definitions and forms of informality, national responding approaches and strategies; in addition to highlighting some useful case studies from these countries. This overview provides guidance to national governments by offering a preliminary framework for the preparation of national or local informal settlement upgrading strategies grounded in international and regional best practices and recognizing approaches and regional and national challenges.

The analysis of the different countries focused on the potential lessons learned through highlighting the  advancement level of their public policies responding to informal settlements, the mapping processes of their informal settlements, their physical state and socio-economic situations, the presence of pilot projects, and the involvement of the private sector or innovative finance mechanisms in the upgrading process.

Despite the data limitation, the review and analysis presented by country  conducted in this report enabled some observations on the common and specific challenges, the importance of social and economic aspects of informality, the need for innovative financial and governance mechanisms, and the importance of participation for sustainable strategies and programmes. The review of all approaches that have been addressed in different Arab countries and the examples of the different projects could be concluded in such in some main items as follows: The investment, financial and environmental impacts in most of cases not been tackled and there was concentration on the physical, and sometime social, aspects only. The sustainability of development aspects (financial, social, environmental) of projects has not been addressed in most of cases and there will be risks of sustainability of the development of the projects in future. This would emphasize the need for an integrated development approach to be embraced in development of informal settlement.

The overview also shows large possibility of cross learning among the region, specifically between comparable countries, or those whose political or governance situations are similar. The conclusion also highlights key cross cutting issues that have to be mainstreamed in upgrading approaches and programmes, namely: environment, migration and displacement, finance, gender, participation and local government.

Finally, the report lays out the way forward towards the formulation of the new programme -to be launched in WUF 10- “Towards Arab Cities without Informal areas” where this report and analysis present the first step, followed by the launch of a call for Arab cities to join the first phase of the programme supported by UN-Habitat in cooperation with the Islamic Development Bank. The regional programme will continue to learn from early implementation phases to support progressing of Arab cities that are inclusive, resilient and productive; integrating various sustainable goals and programs to ensure leaving no one, and nowhere behind.