Jakarta, 25 June 2014: The Ministry of Public Works in Indonesia has signed an agreement with UN-Habitat renewing its commitment to the sustainable development of cities and urban areas.

The agreement was signed during a recent official two-day meeting by UN Under-Secretary-General and UN-Habitat Executive Director, Dr Joan Clos to the country.

Building inclusive, safe and sustainable cities and human settlements is a key challenge for Indonesia and many other rapidly developing countries. Dr Clos’ main message during the visit was for Indonesia to enhance the capacities of governments for integrated urban and territorial planning, so that more people and businesses can thrive in liveable cities.

“Urbanization is not a passive outcome of development but a source of development,” said Dr Clos. “Therefore, it is crucial that the post-2015 Development Agenda addresses the challenge of how cities and towns can be better planned and managed, and fulfill their role as drivers of sustainable development.”

Dr Clos invited Indonesia to champion the promotion of the New Urban Agenda nationally and in the Asia-Pacific region by taking the regional lead in the preparations of the Third UN Conference on Housing and Sustainable Urbanisation (Habitat III) and the promotion of inclusive and sustainable urban development.

The Minister of Public Works, Dr Djoko Kirmanto, reinforced Indonesia’s support to the proposed sustainable development goal of sustainable cities and human settlements in the United Nations and expressed the hope that the collaboration with UN-Habitat would not only enhance Indonesia’s regional voice but also help young professionals and planners to learn through regional collaboration.

Dr Clos was invited to Indonesia by the Ministry, which supports neighbourhood improvements and citywide infrastructure development. In recent years, Indonesia has developed strong national community empowerment programmes, put participation into many laws for city development and has seen local authorities and mayors become capable of taking urban development forward in conjunction with urban communities.  In this context, the Ministry’s aim for 0% slums in Indonesia by 2019 is now becoming a viable target. However, bridging innovative spatial planning and participatory development planning for cities and urbanizing regions is still very challenging.

Dr Joan Clos, Under-Secretary-General of the United Nations and Executive Director of UN-Habitat arrived in Jakarta on Thursday, June 19 for the two day visit.  He met with the Vice-President of Indonesia, Dr Boediono, and signed agreements with the Ministry of Public Works.  He also addressed stakeholders in Jakarta on the “Key Role of Sustainable Urbanisation for Development” and visited the Green Kampung Programme in Surabaya. He concluded his visit to Indonesia speaking about "Urban Streets and Public Spaces as Drivers of Urban Prosperity" at Surabaya’s city hall.

Indonesia has supported UN-Habitat since its creation as a UN agency in 1977. Equally, UN-Habitat has provided grant support to Indonesia over the last 20 years to the amount of IDR 756 billion (around USD 62.6 million) at today’s exchange rate, to support housing and reconstruction in more than 10 cities, in collaboration with several government agencies. 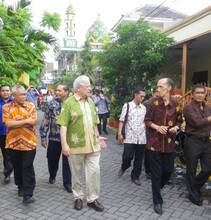