Improving the well-being of host and refugee communities in Maraach, Lebanon

Maraach, one of the most densely populated areas in the Middle East, has some 6,000 residents composed of roughly 60 per cent vulnerable Lebanese and 40 per cent Syrian refugees and other nationalities. Residents face many challenges including poverty, limited access to water and electricity; few safe, accessible public spaces; exposed unsafe electrical wiring and run-down buildings and common spaces which were badly damaged by the Beirut Port explosion last year.

The project involves the rehabilitation of building facades and public spaces, improvement of street mobility and safety, and accessibility to basic urban services. It included the installation of a solar energy system, which will put energy back into the grid to provide greener, cheaper electricity to the community and power streetlights to improve safety.

“An early success of the project is demonstrated through enhanced social cohesion between the host, refugee, and migrant communities who are working closely together with UN-Habitat, the Polish Centre for International Aid and the Municipality of Bourj Hammoud to improve their own living conditions and well-being,” said Wael Sinno, Area Coordinator for Beirut and Mount Lebanon at UN-Habitat.

Some 90 buildings and five alleyways, identified following consultations with local communities, will soon be upgraded under the project. The consultative process provided a practical demonstration to the Municipality of Bourj Hammoud on how to conduct a community-based consultation process.

The project also engaged residents such as Alaa Soultan, a Syrian refugee in cash-for-work.

“Due to my family’s economic situation, I couldn’t pay my university tuition fees. Through my experience in the rehabilitation of electrical wires for the past three months, I was able to secure money for my tuition fees and gain skills in a new field,” she said.

To help prevent the spread of COVID-19, a group of women produced 4,500 reusable face masks. They also made 720 tote bags through cash-for-work to be used in a door-to-door awareness campaign on solid waste management, reduction and reuse.

UN-Habitat and the Polish Centre for International Aid (PCPM) trained and distributed firefighting equipment to 54 community members and delivered a fire engine with a high-pressure pump for use in dense urban areas to the Lebanese Civil Defence Centre in Bourj Hammoud. The Centre was rehabilitated by its members through the cash-for-work programme. “We earned some money to support our families while improving the conditions of our working environment,” said Garine who volunteers at the Centre. 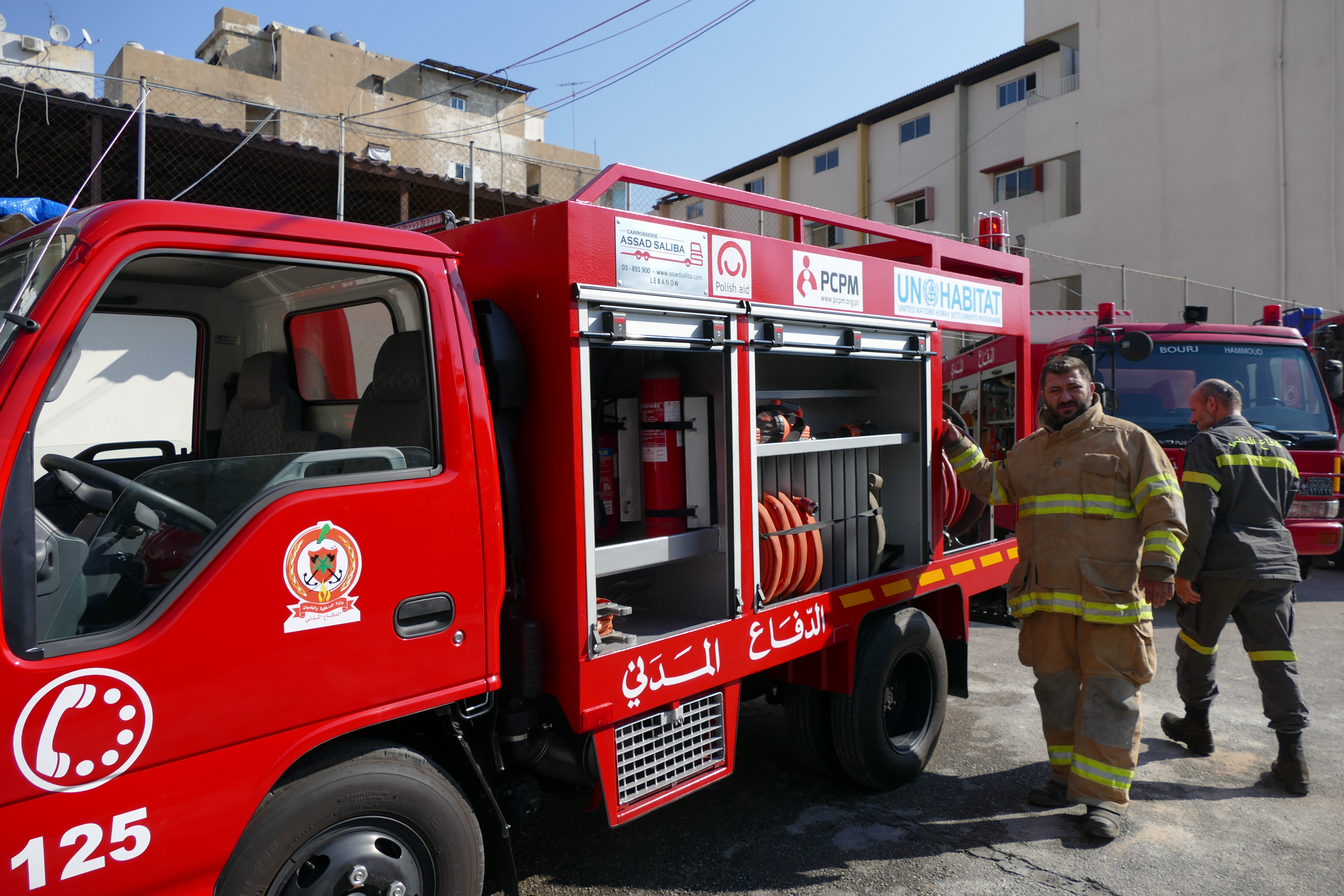 “As a whole this project is a key example of UN-Habitat’s approach to community-led urban upgrading that improves living conditions of residents from multiple perspectives: economically, socially and physically, while keeping their needs and challenges at the forefront of the project’s interventions,” said Taina Christiansen, Head of the UN-Habitat Lebanon Country Programme.