How Katowice, Poland, went from coal city to culture and conference hub

“When I first came to Katowice in 1991, it was one of the most polluted cities in Europe,” remembers Jean-Christophe Adrian, then UN Habitat’s task manager for the Sustainable Cities Programme. “The entire city was a dark gray, black color from the smoke. One of the rivers only had 15% water in it, the rest was chemicals. However, it still felt like a vibrant city with its mining culture.”

Katowice, a southern Polish city and one of Europe’s most populated urban areas, has undergone enormous changes in the last decades. Its shift from a coal mining city to an international hub for conferences has been so successful that it was chosen to host the 2018 UN climate conference COP24 and the 2022 UN Habitat World Urban Forum.

In late June this year, while opening the World Urban Forum in the Spodek Arena, a multipurpose complex right next to the conference center, Mayor Marcin Krupa expressed the hope that “soon, many other post-industrial cities will look to Katowice.” Indeed, more than 16,000 participants flocked to the city for the event to discuss the implementation of the New Urban Agenda, the United Nations’ framework for sustainable housing and urban development.

The result: The Katowice Declared Actions, a document which reaffirms the importance of urgent action in cities all over the world to achieve the UN General Assembly’s Sustainable Development Goal 11’s ambitious objectives for sustainable cities and communities by 2030.

It’s worth taking a closer look at the successful urban transformation of this mega-event’s host city. Katowice is only 157 years old, young for European standards. It’s the capital of Upper Silesia, an agglomeration of more than a dozen cities with 2.3 million inhabitants. For decades, the predominant industry in Katowice was the production of coal and metals such as steel and zinc. But when the mines were closed one by one in the 1990s, about 70% of jobs were lost. Economic declines and increasing rates of homelessness and drug consumption ensued. “This was a very difficult time for the city,” remembers resident Krzysztof Smętkiewicz. Back then, he says, almost every family in Katowice had close ties to the heavy industries.

According to the city’s mayor, Katowice has now overcome its two biggest challenges: Unemployment and environmental pollution.

“We transformed the job market from the heavy industry and replaced the coal mines with businesses, with new technology, with the entertainment industry and with the culture industry,” Krupa says. Key for this transformation was the construction of the city’s conference center, the Silesian Museum and the National Polish Radio Symphony Orchestra buildings. All three institutions are in close walking distance to each other, occupying the ground of a former coal mine. 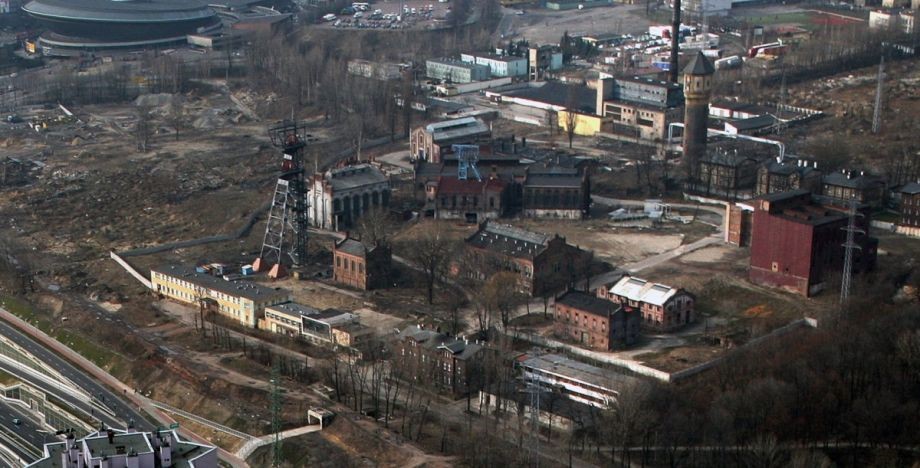 The large mine that was on the site where Katowice now boasts a large conference center, museum and symphony.
[Mayor's office]

“The biggest challenge was not to leave anyone behind, not to make people jobless or homeless; and Katowice managed that process quite smoothly,” Krupa says. Now, the new flagship Gaming and Technology Hub project is just one of many endeavors that firmly place Katowice as one of Poland’s top industrial, commercial and financial hubs. Unemployment rates are low at only 1.5%. Salaries are among Poland’s highest.

For decades, Katowice had to grapple with the environmental impacts of the heavy industry on the region. In the post-mine landscape, the pollution from coal mining and other heavy industries was extreme. Katowice’s air quality and ground pollution levels are still higher than those in many other European cities: In 2018, Katowice was the continent’s 6th most polluted city. But through technologies such as smog-combatting drones, the city is working hard on improving the situation.

“The cleaning up of the city is about 90% done,” Krupa says. “There is still work to do, but the heaviest workload is behind us.” Today, 42% of Katowice’s urban area is covered by forest and green space.

Jean-Christophe Adrian, former director of UN Habitat, emphasizes the importance of a learning process through many smaller pilot projects. “There was no point in working only with the city council,” he says. “We needed to work at the scale of the entire urban agglomeration, since smoke doesn’t stop at the boundaries of a city. Polluted water from the river will still flow to the next city.”

By establishing a formal municipal union, using an intersectoral approach to environmental and political challenges, and learning how to involve residents, Katowice slowly started its ascent.

“Urban transformation is more than the introduction of good technological solutions,” says Raf Tuts, a renowned urban expert who serves as Deputy Executive Director of UN Habitat and directs its Global Solutions Division. “You also need a social transformation, such as the repurposing of former workers’ housing estates into multi-purpose, vibrant communities.”

The famous Nikiszowiec district is a good example for this. This settlement was built in the early 20th century by the local metallurgical concern. Today, the former mining workers’ apartments have become popular real estate. They are located close to a large park, and boast green courtyards and infrastructure such as a school, a kindergarten and a hospital.

But of course, not everything is rosy in Katowice. When the city’s shiny new conference center was built, local residents were not convinced. Approval rates were as low as 1% at first. People wanted public amenities rather than an international meeting center. However, residents say the persistence of the municipality’s cultural committee, supported by UN Habitat, the European Union and UNESCO, eventually won over many locals. “Citizens will always ask, what’s in it for us,” Krupa says. “We have shown them the economic benefits, the increase in jobs, better public transport, and an increased city budget.”

Smętkiewicz, who lives in Katowice and works as a tour guide, says that he appreciates the city’s participatory budget. Every year, there are 20 million złoty (4.3 million USD) available for projects that citizens can suggest. The money is then distributed between the projects with the most votes by residents. Smętkiewicz points to the enthusiastic work of municipal officers who wanted Katowice to win the title of European capital of culture: Their ambitious campaign from 2010 onward had a snowball effect. “We didn’t get the title, but this created a great energy among young people and inspired many cultural projects,” he says. In 2015, Katowice was recognized as the European capital of culture and a creative city by UNESCO.

The city still suffers from high volumes of traffic passing on brutalist-architecture highways close to the city center, flanked by Le-Corbusier-like 15-story-high residential buildings and some Soviet superblocks, which make it difficult to navigate for pedestrians. The way from the city center to the conference center leads underneath the busy highways and shows how a city can be adapted to be more pedestrian-friendly. “Katowice is very livable and has a good scale, apart from these highways,” Smętkiewicz says.

But some say the surrounding areas have had to pay a price for the local capital’s cultural transformation.

“Katowice gets all the funds and is draining the local culture economy in smaller towns,” says Martin Sliwa, who lives in Chorzow, a medium-sized city close to Katowice. “Our cities are now only the bedroom for Katowice.”

Sliwa also notes that Katowice has a strong job market. Like many cities in Poland, it struggles to keep its young people, but events like the Intel Extreme Masters, an esports tournaments, and the increasing number of jobs in the IT and gaming sector make it more attractive to stay.

“If we, as a post-industrial, black-hole city can do this, every other city can,” Smętkiewicz says.

Culture-based development was key for this transformation, Tuts and Adrian agree. So was support from and consultations with stakeholders within the city itself. “If I had one advice for other cities, it would be to talk with all the stakeholders to slowly change the mindset, enable an exchange and learn from each other,” Adrian says.

Next steps for the city’s urban development include a focus on the 15-minute-city, elements of which were visible during the WUF conference with its 11 different zones, all walkable within 15 minutes and integrated well into the city through informative, participatory and musical elements.

“It is best to invest in culture to show people that the city is changing a lot,” Krupa said. “Look at the difference. We had a coal mine here, and now it is a concert venue.”

This article first appeared on NextCity.org.