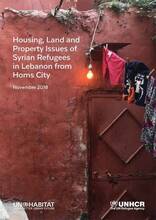 The “Housing, Land and Property Issues of Syrian Refugees in Lebanon from Homs City” project was launched in 2017 in partnership with UNHCR and with the support of the Ford Foundation. The aim of the study is to analyze the housing arrangements that refugees coming from Homs city have secured, seven years into the crisis, in addition to their living conditions, the implications of their legal status on their presence in Lebanon, and the role/influence of social networks - characteristic of this community coming from the city of Homs - on their access to shelter and trajectories. The project contributes to the knowledge about refugee trajectories in the context of a protracted refugee crisis particularly in relation to shelter acquisition. The results reported in this study can promote public awareness about the implications of the absence of affordable housing programs and the current restrictions that refugees in Lebanon face to access adequate shelter. They can further inform policymakers and other actors in the shelter sector about the current operations of the housing market.