Lebanon hosts the highest number of Syrian refugees in the region. UNHCR estimates that over one million refugees currently reside in Lebanon, in addition to at least 50,000 Palestinian Refugees from Syria (PRS). Most of this influx has occurred in the past year. In January 2013 the refugee population was less than 150,000, but grew almost six-fold during 2013.

UNHCR and UNHabitat conducted an assessment of housing, land and property (HLP) issues related to the Syrian refugee crisis.4 This report reviews the impact of the crisis in four specific areas:

(i) Shelter options available to refugees 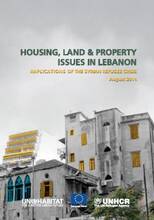