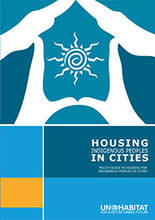 The lack of recognition of the right of self-determination and the large-scale dispossession and degradation of their lands, resources and territories has had a devastating effect on indigenous peoples’ livelihoods, cultures and overall socio-economic conditions. Widespread poverty and destitution flowing from this has had a significant impact on their housing. Indigenous peoples often lack security of tenure and live constantly with the threat of forced eviction from their homes and/or lands. In some countries, indigenous peoples are often found in over-crowded houses that are in poor condition and that often have neither schools nor hospitals nearby. Indigenous women and men face discrimination in most aspects of housing. Housing and development policies and programmes either discriminate against indigenous peoples directly or have discriminatory effects. The loss of traditional lands andhousing contributes to the increased migration of indigenous peoples to urban centres, where barriers to adequate housing (such as unemployment/poverty, discrimination, and lack of affordable and adequate housing) are particularly acute.

Indigenous women in particular often bear the brunt of these inadequate conditions. At the same time, they experience gender-specific problems, such as domestic violence, together with discrimination and inequality as a result of institutional and cultural factors. These often curtail or prohibit women’s access to, control over and the right to inherit land, property and housing. Indigenous peoples with disabilities, youth and children, elders and sexual minorities also experience greater adverse conditions in housing.